I recently took delivery of a new HP ProLiant MicroServer which I wanted to use for various small/home office server type tasks. It’s a cracking little server, ideal for small offices and home users who want a small, low-power server. With only one fan in the case it’s fairly quiet with most noise coming from the hard disk supplied, and any more you put in it. 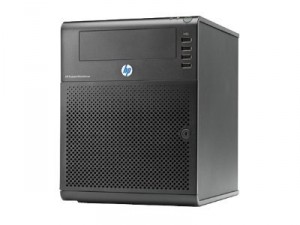 The reason I got it was because HP are currently giving £100 cash-back (until end of January 2011) on the ProLiant MicroServer. Given how cheap it already is the cash-back makes it even more attractive! It’s not super powerful and certainly not “pro server grade” kit, but perfect for my needs.

If you want to see more technical info then I’ve put online the output from lspci, cpuinfo, dmesg and lshw.

As is common with many servers, the device ships with no operating system installed and it has no optical drive so I chose to install Ubuntu 10.04.1 (LTS) from a USB key I had kicking around. On my desktop PC I simply plugged in the key & started up unetbootin and chose “10.04_NetInstall_x64” from the list of distributions and my USB key from the list of drives, then clicked OK.

The BIOS on the HP MicroServer is a little quirky when dealing with boot devices. I had to fiddle about a bit to get it to boot off of the USB key, but once booted I was able to go through the installer with the server connected to the network and install a base Ubuntu Server on the single 160GB internal disk. I chose to install onto a 10GB root partition with some swap space allocated but the rest of the disk left blank for now.

One mistake I made during installation was to install the grub boot loader on /dev/sda which at the time of install was the USB key, and not the 160GB internal disk! The result was I couldn’t boot Ubuntu Server without the USB key attached. D’oh! I fixed this with the grub-install command to install it on the internal disk (once I got the right device name from sudo fdisk -l) and from that point I could yank the USB stick and boot normally.

I had a few spare 200GB disks kicking around that I had from an old server, so I added those into the mix and then used LVM to create one big disk across the 3x200GB disks and the remaining space on the 160GB disk. I didn’t use any RAID at all because I’m just playing with it for now. In the future I might invest in a couple of bigger (~1-2TB) disks and maybe use RAID 1, but not for now. It’s also worth noting that this is initially going to be a backup server so I don’t care too much if a disk fails because the data exists elsewhere.

I have the large LVM volume mounted under /srv and am storing all backups in that location. I’ll cover how that all works in further blog posts. For now I’ve put the server away in a cupboard where it’s humming away connected to my wired LAN via Devolo dLAN Adapters.

So far I’m running offlineimap and rsnapshot on it to do backups, and I’m playing with a few other applications which I may blog about later :)