Over on r/mk you’ll find a community of mechanical keyboard enthusiasts. People who enjoy collecting, building and showing off their primary computer input device. Like any collector community, it’s a fascinating glimpse into the world of people passionate about something we all likely have used, but don’t feel especially invested in.

I’m certainly no MK afficianado, but I use keyboards all day every day, so like wine, I can appreciate a relatively good one, but I’ll also tolerate a cheap and crap one if pushed. There’s three keyboards I use on a daily basis, both old and new.

This venerable IBM Model M keyboard has been in my possession since the mid 1990’s. It’s my daily driver. Indeed, I’m typing this very blog post on it right now. It sits on my desk, attached to a desktop computer via a little PS/2 to USB dongle, and gives me hours of pleasure each day as I work. 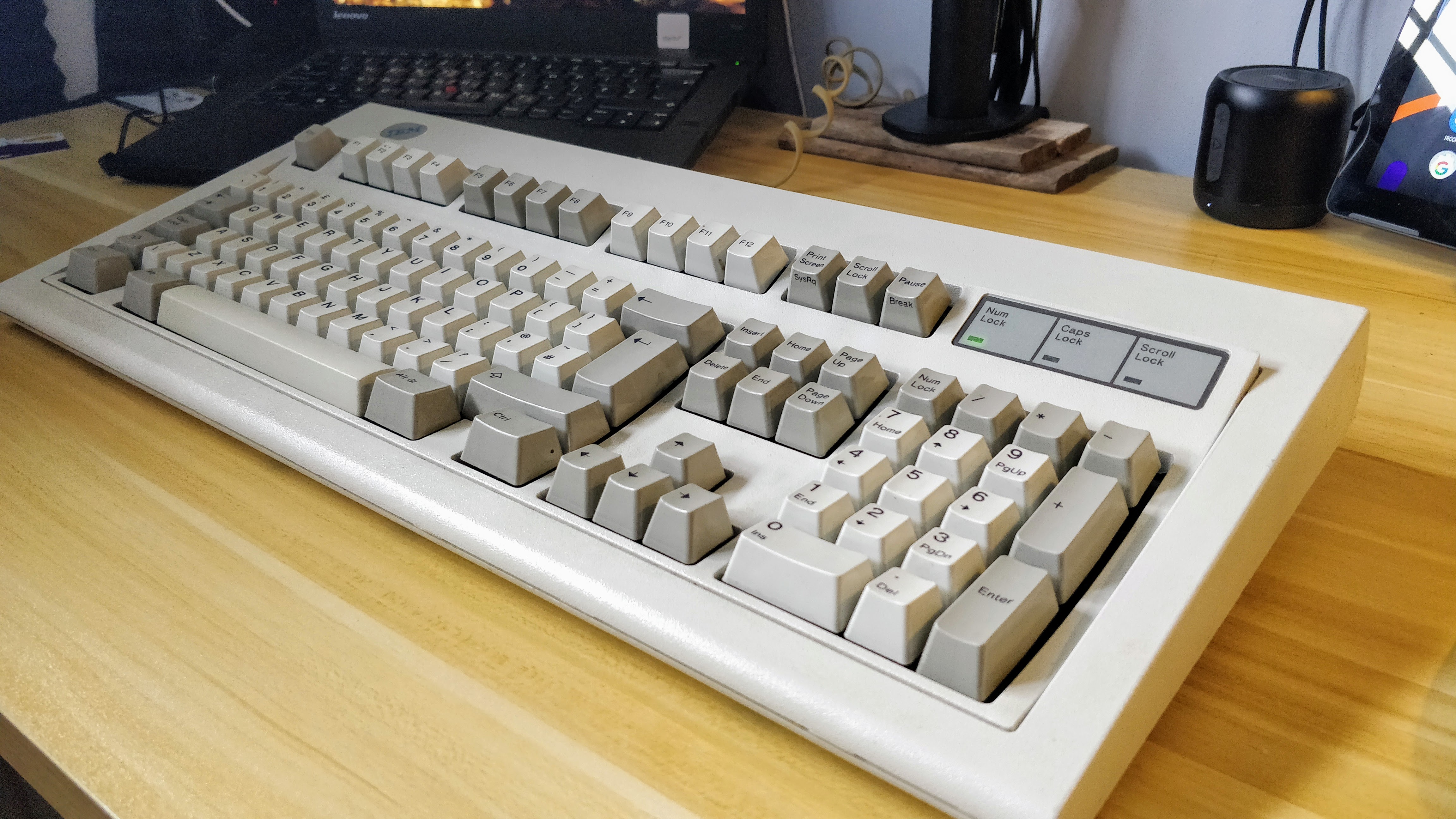 Here it is back in 1999, the earliest photo I have of it in use. Take a moment to absorb the nearby glory of a 17" Ilyama monitor, Ricoh SCSI 2x CD burner (with caddy!), Palm III, and even a US Robotics modem (behind Twiglet, the cat). The stapler is the only thing in this photo I still own, aside from the keyboard. 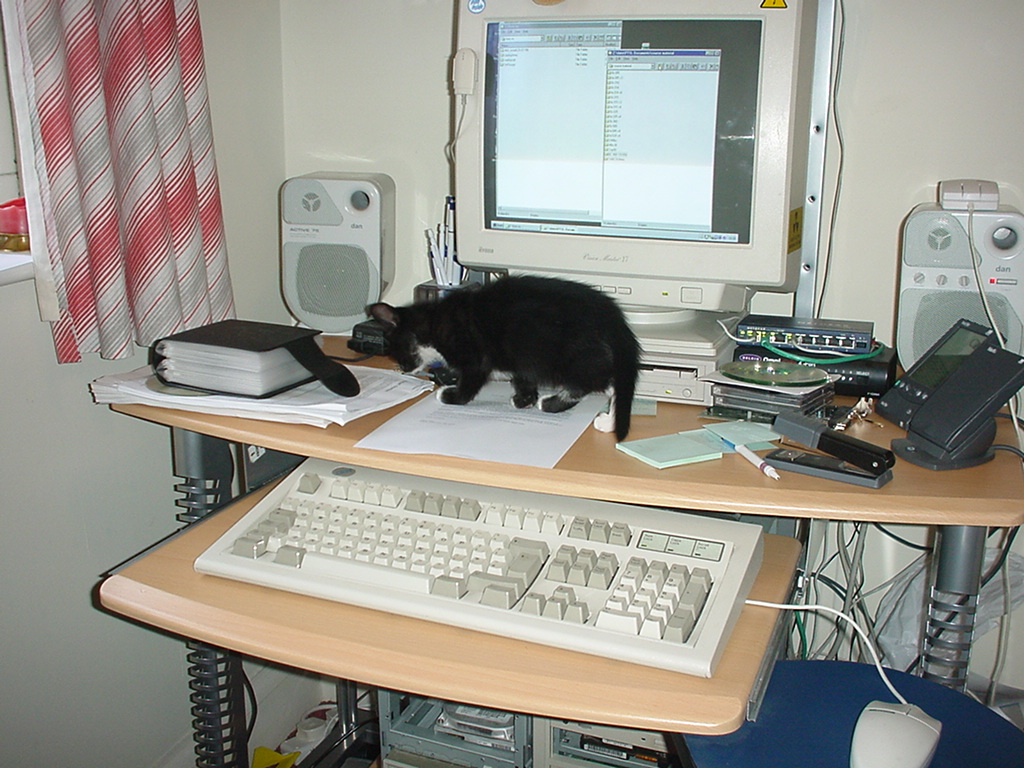 Using the Model M is a uniquely pleasurable experience, for the user. For anyone around them, it’s likely the most annoying noise in their day. Working from home in your own office has many benefits, and not being shouted at for “typing too loud” is certainly high on the list.

The travel and feel as your digits dance across the beige buttons, composing your opus, or merely messaging mates, is sublime. The Model M has an unmatched heft and solidity compared to modern counterparts. You know you’re using this keyboard. Its presence on the desk is imposing, never taking second fiddle to anything else nearby. It’s a monument.

In use, there’s a rhythmic, almost musical click and clack of each key. Each has their individual characteristic sound, from light deftness of the main letters to the echoing resonance of the enter key to the soft ‘boing’ of the spacebar. Every keypress is a unique audible delight for the user.

I don’t think I’ll ever give up my Model M, I suspect I’ll have to be cremated with it, and even then it’ll likely survive the process.

If you’d like to hear the sound of the glorious Model M, you can probably pick one up on ebay. Alternatively install bucklespring (snap avaiable) which accurately reproduces the sound, but obviously not the feel, of the classic IBM part. Run it through speakers to effectively reproduce the annoyance for those around you.

For years, the IBM ThinkPad keyboard has had a decent reputation. Lenovo buggered about with the keyboard a few years ago, which lost them the crown, in my opinion. However, the traditional 7-row model of the X220-era is a classic, which I still use today, via these external, USB keyboards. 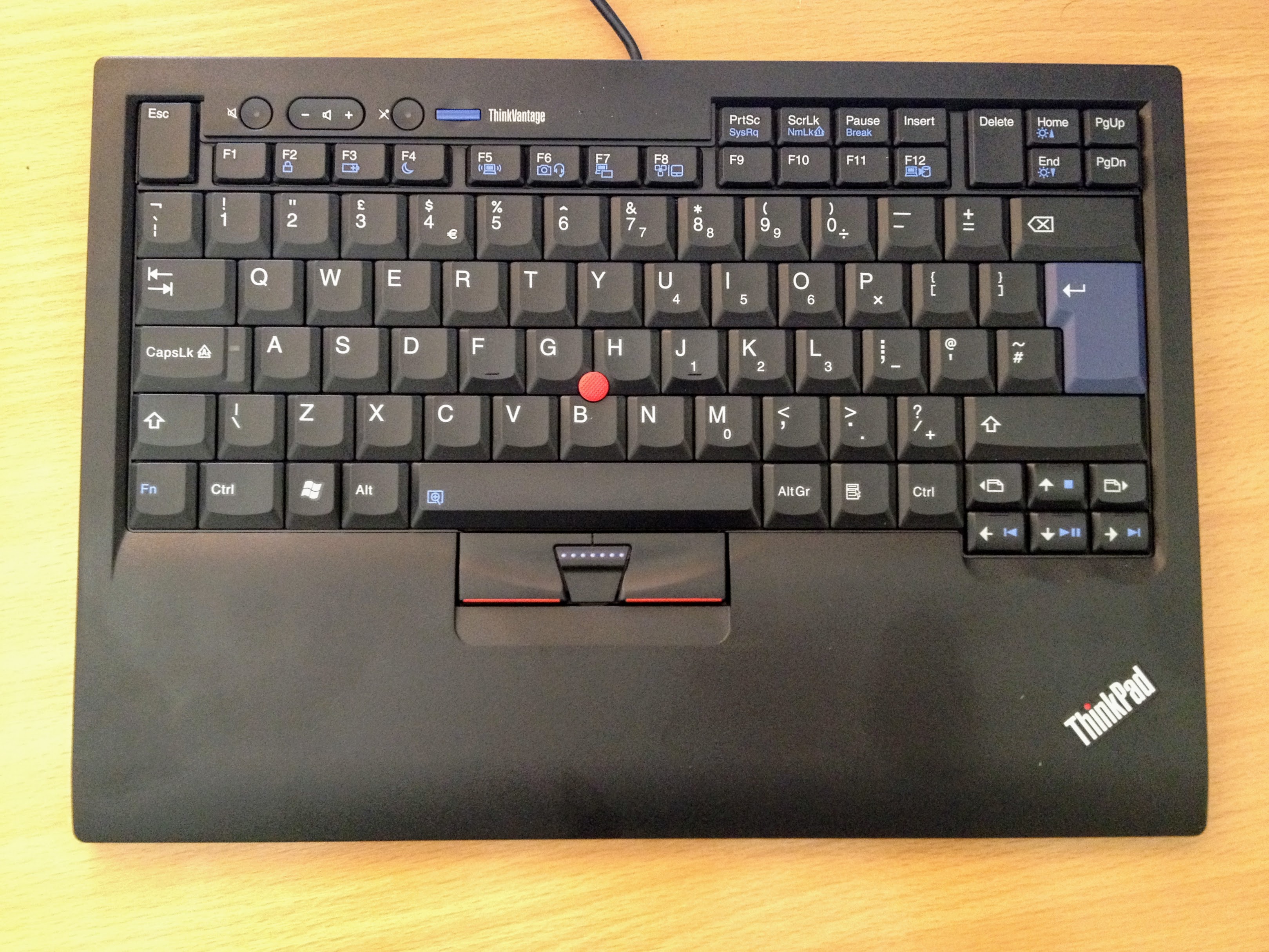 The Lenovo SK-8855 sports a TrackPoint - “No external mouse required” says the specification document. I get that some people just can’t get along with the TrackPoint. It’s like riding a bike, once you learn, you can either become a master, and be comfortable with it at any time, or give up and walk everywhere instead. I prefer to cycle the Information SuperHighway with the glorious red nipple.

I typically use these on basically every computer which either has no on-board keyboard such as home servers & Raspberry Pi, and those which have ‘bad’ internal keyboards - i.e. all non-Lenovo laptops. The onboard pointing device saves a USB port on a Raspberry Pi, and is just more convenient. Embrace the nubbin, heathens.

Some time ago, while browsing r/mk, I saw images of a prototype “ThinkPad” style keyboard. This thing looked like a dream come true. Can it really be possible to marry the glorious mechanical nature of a Model M, with the layout of a ThinkPad X220, including the TouchPoint‽ 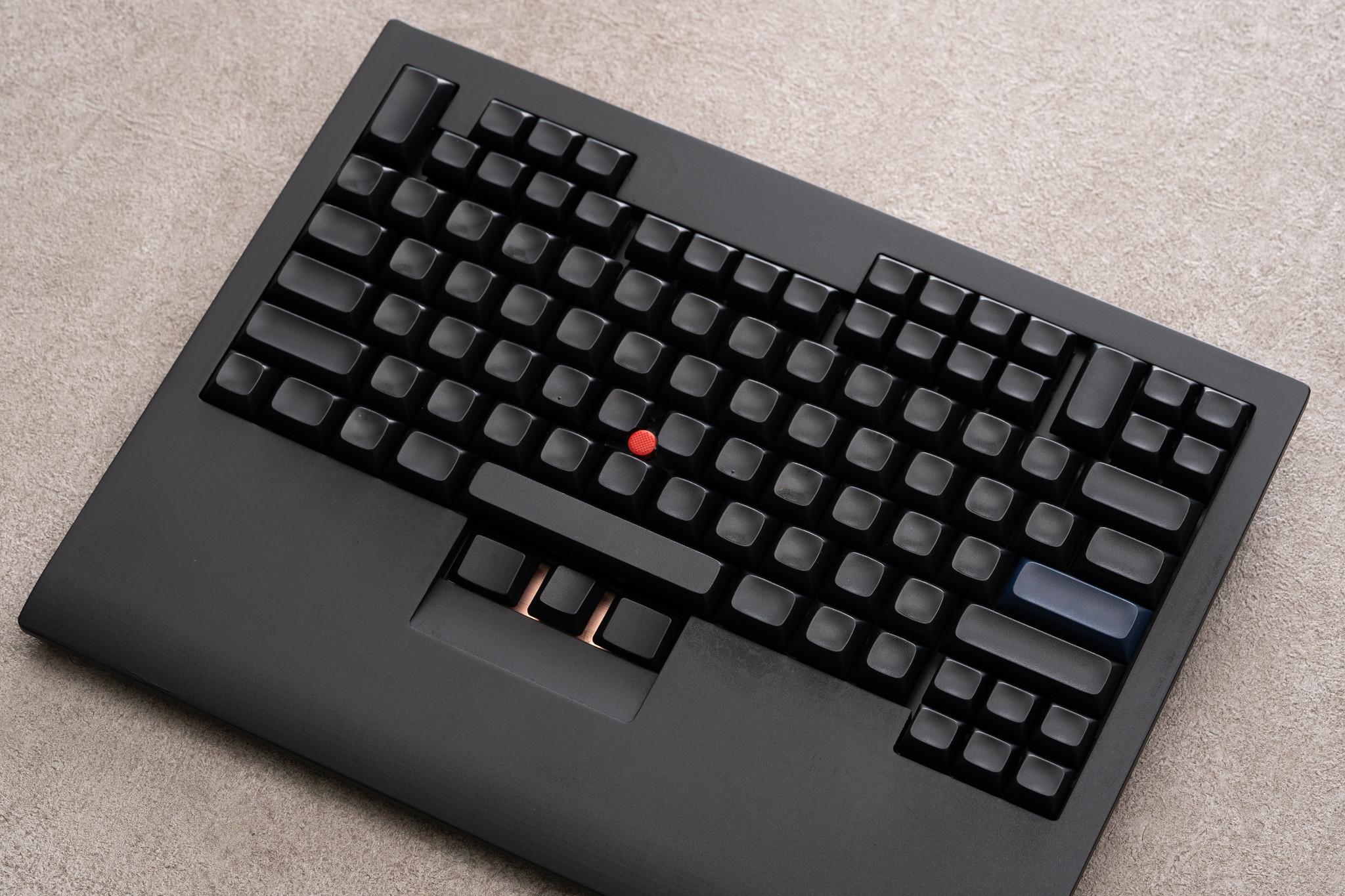 I eagerly awaited the manufacture and sale of these keyboards, until in May I saw they were available. I don’t think I’ve ever bought anything online any faster. It shipped in mid July and I was giddy with excitement when I got the email notification. 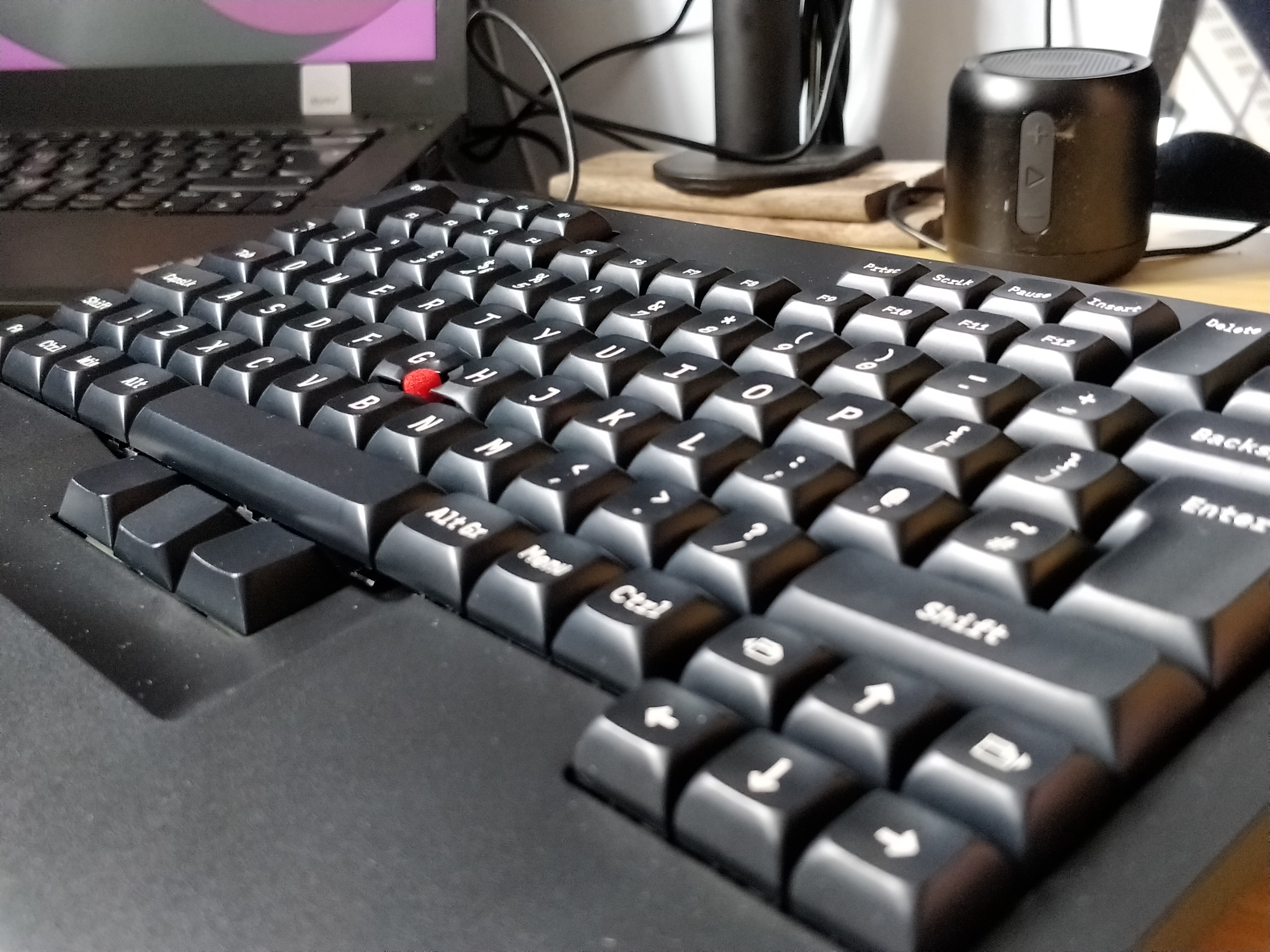 This thing is amazing. I foolishly didn’t opt for the BlueTooth module, so used it attached by a supplied USB C cable. Pretty soon after I ordered the BlueTooth adapter, and life got better by one wire.

Typing on this keyboard is one of the most pleasurable parts of my day. The familiar layout, vintage style key-shape, and accent colours mean it’s a real joyful device. The compact (albeit hefty) size means it fits in my laptop bag along with my ThinkPad T450 - something that can’t be said of the expansive IBM Model M! It feels very well made, and I hope it lasts as long as the Model M before it.

I can see how the denizens of r/mk get hooked on these things. I don’t plan to, but, you never know…