I woke up this morning to a notification injected into my timeline in the Twitter app. 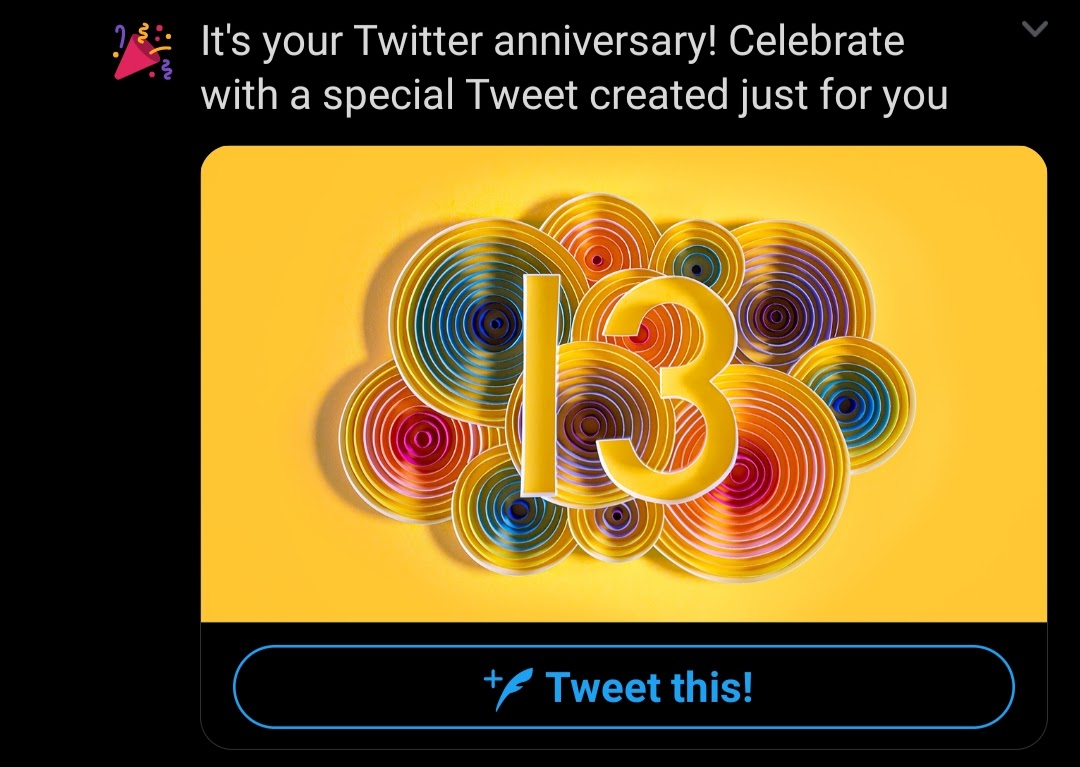 Apparently it’s my “Twitter anniversary” which I can “celebrate” by tweeting out a pre-made picture of the number 13. That’s too easy. Instead I recently downloaded my Twitter data. Let me be self-indulgent and take a look and see what happened over those 13 years.

For those who haven’t tried downloading their Twitter data, what you get is a browseable archive with a summary front page. 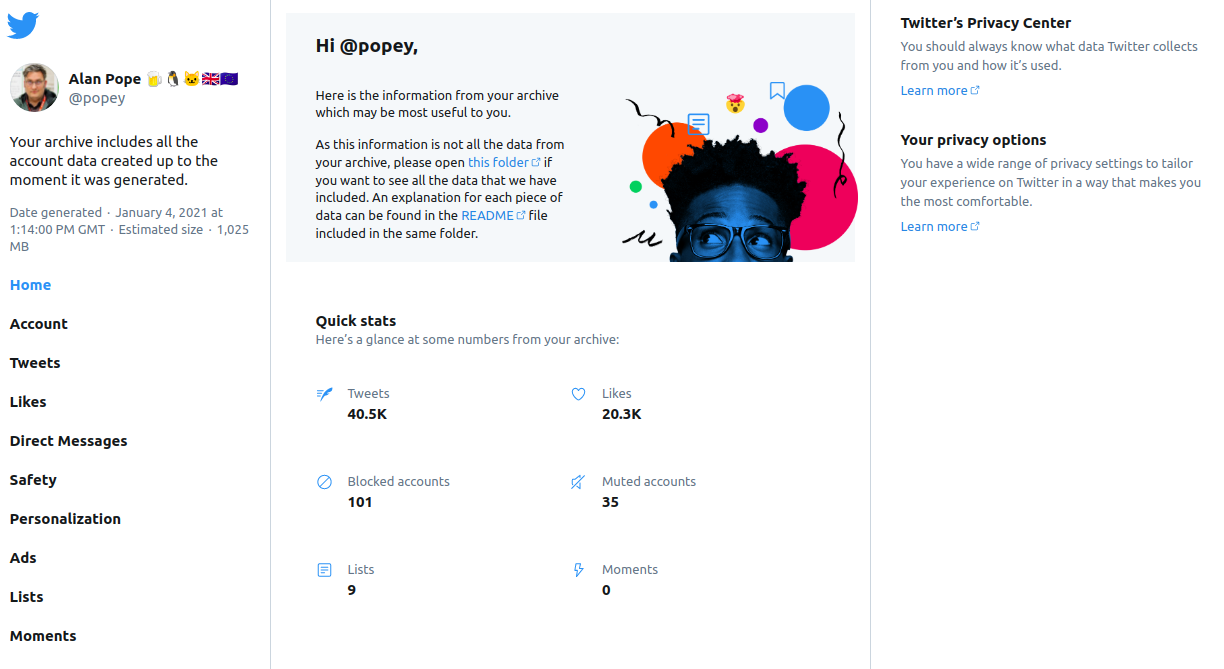 Worth noting the archive contains your own tweets, direct messages and other data, but doesn’t have the tweets you replied to. It is possible to click through and view them in context back at twitter.com but if the person you’re conversing with has deleted their tweets, you end up with a disjointed mess, looking like you’re talking to yourself.

It’s quite fun to browse the nonsense you’ve released to the world over the years. In we go!

I had signed up before but maybe didn’t understand it or like it. I deleted my account a while later, then changed my mind again, and re-created it. So maybe it’s a little over 13 years now, but that data is lost to the mists of time.

Back in 2008 Twitter clients were all the rage. Sad that now we’re basically stuck with the web, tweetdeck and the official app. I used to really like mucking about with Gwibber and other funky clients.

Oooo, gtwitter seems to work (well if this arrives it does)

At the time I was commuting to Wales each week for work. I shared a rented house with a co-worker, where we had no TV and no broadband connection. Twitter was all I had, on a terrible 3G connection. So I moaned a bit about the lack of Internet.

No TV, no internets in the house, sounds like an evening of programming for me

Narrator: Alan didn’t do any programming back then.

I still moan about my Internet connection going down. Nothing changes there. Now though, I can whinge directly at my ISP!

@virginmedia Our broadband has been broken most of the day. :( pic.twitter.com/xWL9ROb2fW

I don’t envy the people working in customer support for my ISP, they get a flood of tweets like mine whenever there’s an outage. In fact now when the “Internet is down” I often search their brand name on twitter before I bother with their status page. It’s usually a more accurate barometer of whether it’s a local issue or something more widespread. So that’s handy!

My employer at the time issued me with a brand new ThinkPad, which I was clearly excited to receive. Nothing changes here!

Waiting patiently for my new IBM thinkpad to arrive,,,

Long before I started working at Canonical, I was an enthusiastic Ubuntu user.

I love that from zero to fully functioning laptop takes about an hour with Ubuntu. updates, added apps, data, the lot. /me hugs ubuntu

In fact, installing Ubuntu on the above ThinkPad almost got me fired by a very persnickety security auditor. It was quite stressful having someone sit on your desk and demand you immediately delete a partition or you’ll be walked off-site. I called her bluff and said I’d hand the laptop back if she forced me to use Windows. I also threw a co-worker under the bus and said “He uses Ubuntu too!”, which helped my cause.

It all worked out in the end once they investigated and realised I was compliant with all company IT policies. Happy memories 🥰.

I did engage in a little bit of Vague Tweeting. 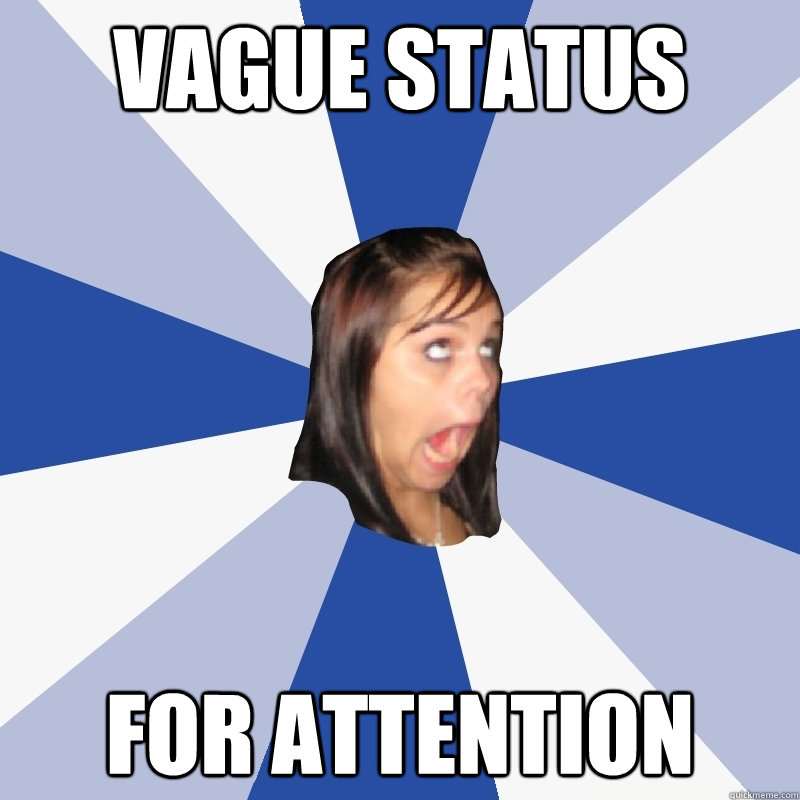 I suspect this “secret plot” was planning for the start of Ubuntu Podcast, which launched later that year as Ubuntu UK Podcast, and is still going 13 years later!

Happy that the feedback about the Ubuntu UK Podcast has been positive overall \o/ http://podcast.ubuntu-uk.org/

I think my favourite tweet from back in the early days of Twitter is this one where I admitted to being a bit of a dork, googling for aircraft registration numbers when I see them on TV. Yes, I am sad.

Is it sad that whilst watching Spooks on BBC iplayer I saw G-TOPC on the choper pilot heaphones and googled it? http://bit.ly/1tUb8a #fb

Surprisingly though, the actual owner of the helicopter in question emailed me soon after, saying they saw my tweet and offered me a ride in it!

In 2016 I had what (for me) would be considered a ‘viral’ tweet. I think to this day, 4 years later, it’s still the one that’s been most shared and favourited. It’s basically me bitching about how much memory Slack consumes. I seemed to hit a nerve though.

I am in 6 slack channels. 1.5GB RAM consumed by the desktop app. In 100+ IRC channels. 25MB consumed by irssi. The future is rubbish.

I still feel kinda bad about that negative tweet. However, I was happy to report 18 months later, that the situation had improved.

I am delighted to report, 18 months later, that @SlackHQ version 4 has dramatically better memory usage than the previous release. It's only using 300MB here, with way more workspaces in use! Well done Slack team. Get the latest #Linux release from https://t.co/6GKkP0Oysk :D https://t.co/3AWqC0zVY6

I sometimes get a bit too snarky on Twitter for my own good. In my defence, there’s a popular blog post speculating on this topic which keeps getting shared over and over on socials. It gets a bit tedious when you see it every few days. Hey ho, it was probably funny to me at the time.

Wonder how long this run will last. 🤞 pic.twitter.com/Fh7Pn3nzfm

Also, around the same time, I was getting grumpy about Distrowatch. Something I have long lamented and eventually blogged about yesterday in more detail. I’ll shut up about this topic now.

Go to DistroWatch, set the "Page Hit Rank" data span to 7 days. Observe the green up arrows. Note that traffic to distro pages is driven primarily by recent news on the site itself. Not distro popularity. Tomorrow, look for Plamo, Finnix, Zevenet & KDE Neon on the rise. pic.twitter.com/WRaErITKXu

I think the general grumpyness back in May last year could be somewhat correlated with the family breakdown we had. The single emoji tweet I posted on 14th summed up my feelings. It was quite a low point.

Sorry to anyone I was grumpy at last year. It was shit. Still is, but the end is in sight.

On a more positive note, before all the nonsense, I used to like posting old photos of my cars. Here’s my first car.

Last week on @asknewshow I mentioned my first car, which I'd wrapped around a telegraph pole. This was that beautiful machine sometime before The Event. A 1979-vintage Opel Kadett. Listen to the show to hear more stories. Also, that's me, ~30 years ago. https://t.co/YGAOPnDUTe pic.twitter.com/10vqXdfAND

In 2019 I had another fun highlight. There was a whole “Stop The Coup” movement which bled onto Twitter with the #stopthecoup hashtag. Unfortunately some people mis-typed or autocorrected this to #stopthecoupe. A coupe being a car, not an organised attempt at overthrowing the establishment. A bunch of people amusingly pointed this out, and I joined in.

Only in Britain would #stopthecoupe be trending! I remember my first coupe, an Opel Manta GT/E :D pic.twitter.com/Y4DSq2RPB7

For some reason Twitter decided to use my photo to highlight the trending #stopthecoupe hashtag.

It’s mostly been a fun 13 years on Twitter though. I’ve made friends and learned a lot along the way. Here’s to another 13. 🍹