3 months ago I bought a Eufy RoboVac 30C (affiliate link) vaccum cleaner. Now feels like a good time to write a review. Before The Event we had a cleaner at home who came once a week. We no longer have a cleaner and I’m now the only adult in the house, so figured I could do with some help cleaning up. In short, yes, I’d recommend it, if you have similar requirements to me. No, it’s not perfect, and is no replacement for a full vaccum cleaner, but it helps, a lot. 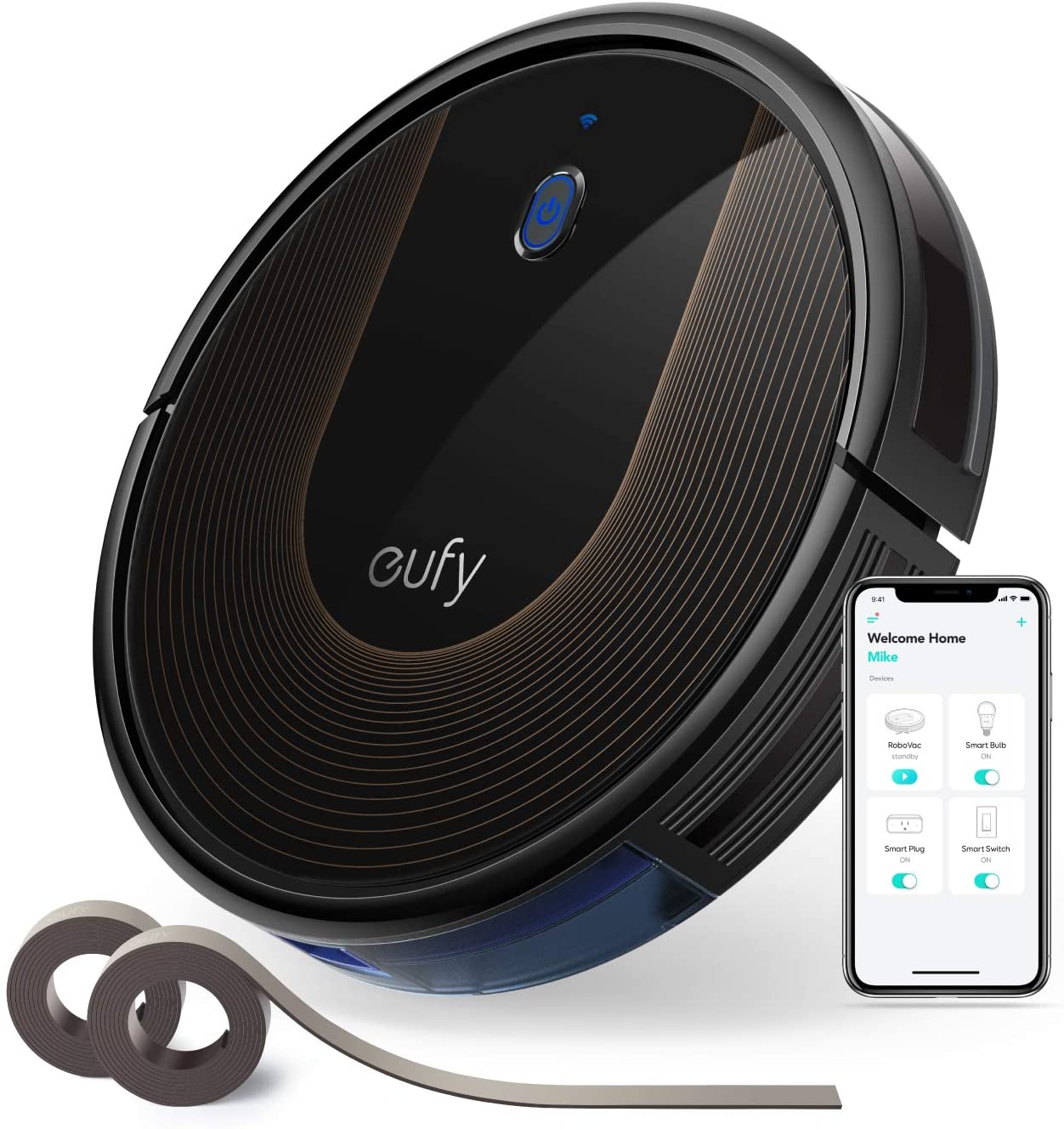 This simply came down to a combination of price point, word of mouth reviews from friends and online reviews. There’s a ton of choice in the robot vaccum cleaner market. My good friend Will Cooke has one, and kindly sent me videos of his Eufy bouncing around his kids bedrooms.

At the high end there are devices that map out and ‘know’ your house layout, meticulously covering every square inch. I didn’t want to spend a fortune and felt a little icky about a 3rd party service mapping the inside of my house and sending it to The Cloud.

At the low to midrange there’s devices like this which bounce around like a ball in a pinball machine, roughly covering all the space, on average. This felt better for me. I didn’t want the most advanced thing in the world, I just want there to be measurably less dust and cat fur on my floor. 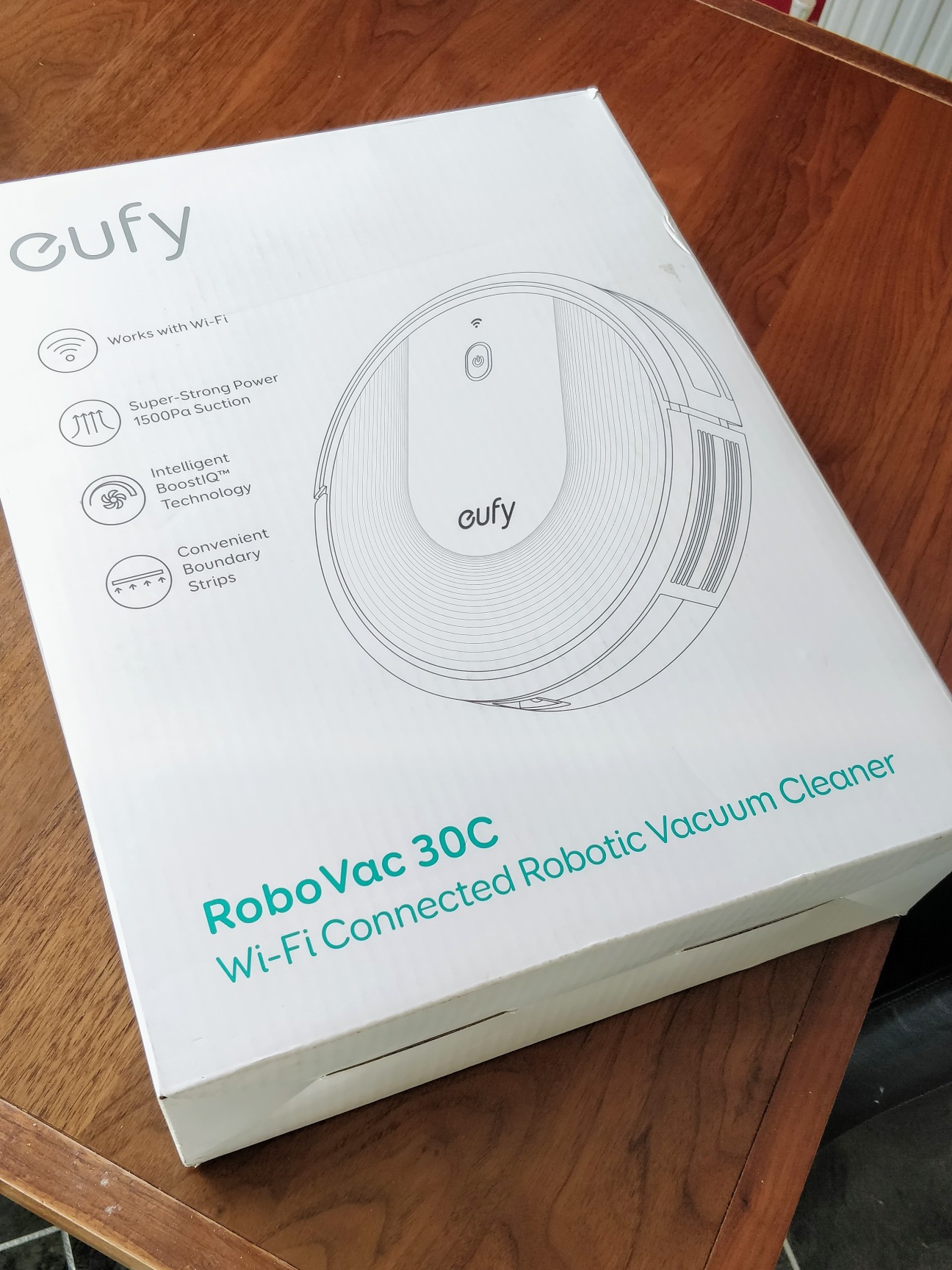 The 30C comes with some spare parts in the box including replacement brushes, a cleaning tool (for removing hair from the pick-up), and a roll of magnetic strip. The strip is optionally used to tell the hoover not to enter certain places. Simply stick a length of it down on a room entry, or other border you don’t want the RoboVac to cross. The box also contains the charge cable, base and remote control.

Setting up the hoover was pretty straightforward, but triggered some other household changes which I’ll get to in a bit. I found a location for the base station to live, in a quiet corner of the lounge, and near a power outlet. There’s a Eufy app for Android and iOS which can be used to monitor and manage the RoboVac (and other Eufy branded home devices). It will send notifications if the cleaner gets in trouble, gets stuck, or can’t find the way back to the base. 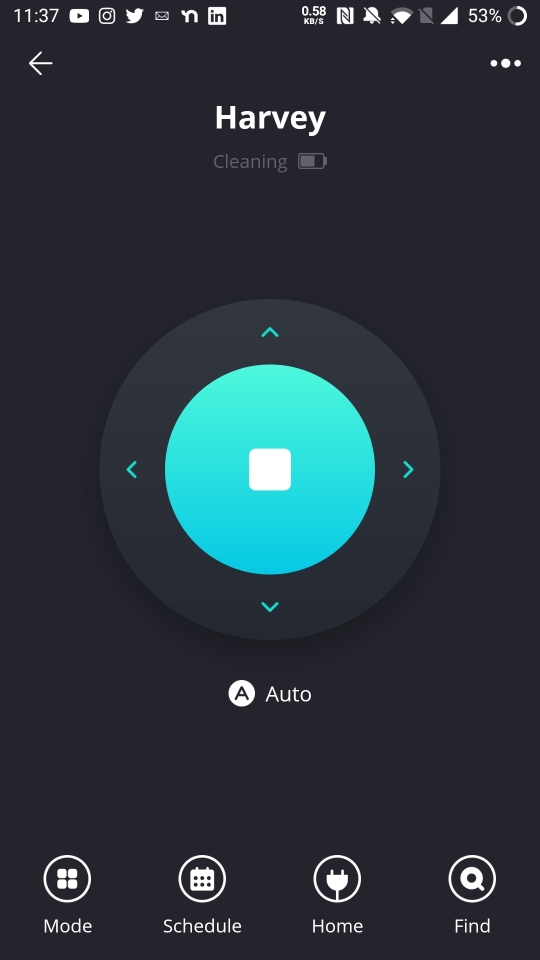 The app also enables you to configure a cleaning schedule. Each day can have one time slot, so you can for example set a different cleaning time at weekends than weekdays, or perhaps only send them out on some days. I initially configured it to clean at 3am, but switched this to 11am every day. 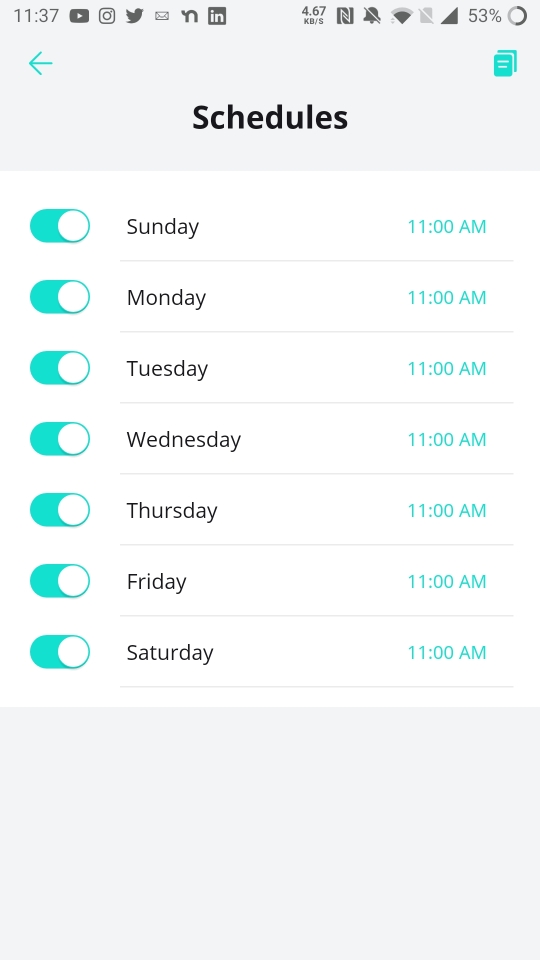 It seems entirely possible to choose not to use the app though. You can easily turn the vacuum on and off by pressing the button on top, or point the supplied remote control at it. I like the app, because it notifies me when the device gets stuck, which it does. More on that later. 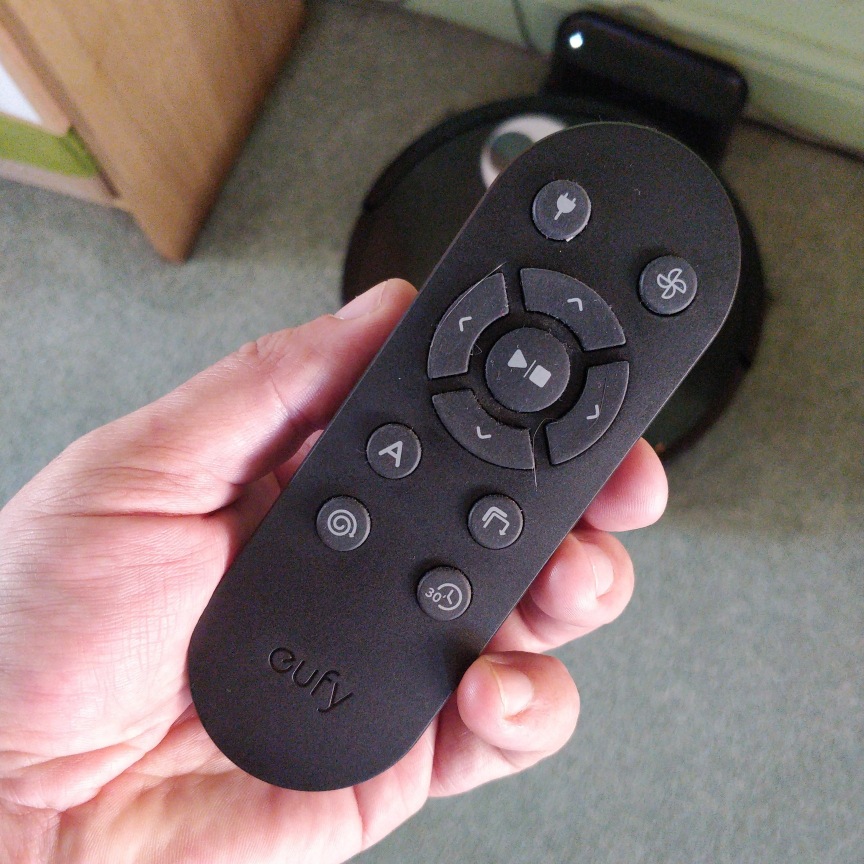 You can’t have a new productive member of the family join the household and not name them. Mine is named ‘Harvey’ after Harvey Keitel, who played Winston Wolfe - a cleaner in the film Pulp Fiction. I like the alliteration of Harvey Hoover. I also bought some massive stick-on googly eyes (affiliate link) to give him a bit more personality. 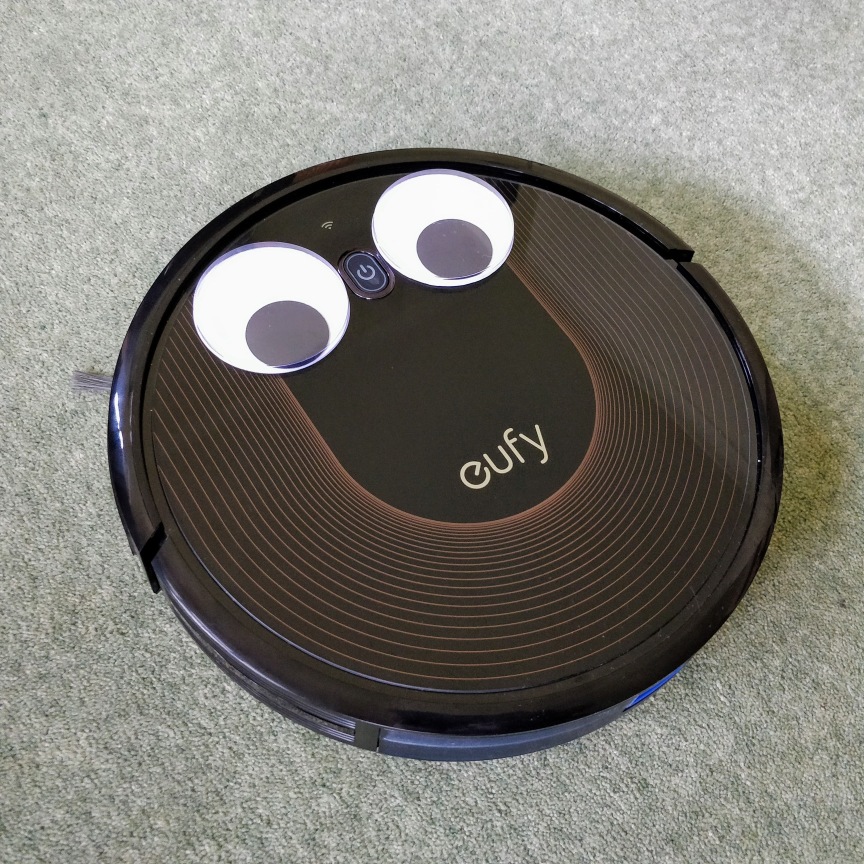 Here’s Harvey in his base station, charging. 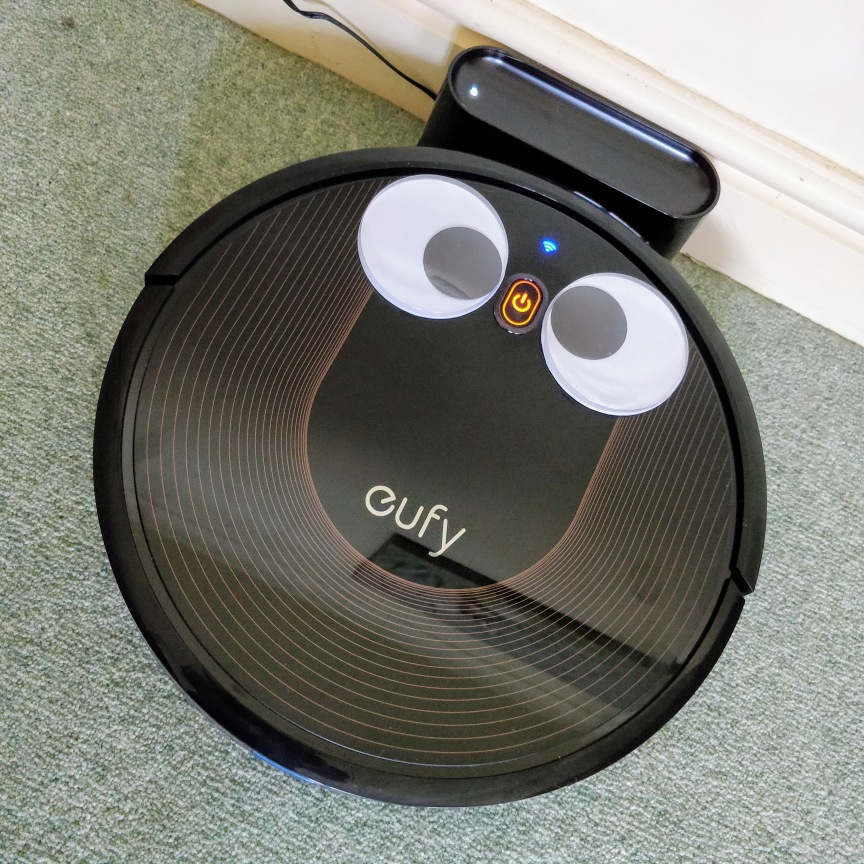 As mentioned previously you can operate Harvey manually either with the application or the remote. He has four basic modes. Auto is the main one I use where he bounces around from wall to wall like a DVD logo. Alternatively he can just go round the edges of the room, do a quick 30 mins clean, or clean a specific spot. I never use those three modes.

For me, Harvey wakes up on time at 11am with a “beep”. He scooches around one floor of the house, venturing under cupboards, sofas, chairs and tables. He will cross boundaries between rooms - if the door is open - and can traverse all manner of floor surfaces. My ground floor is carpeted in the lounge, tiles in the kitchen, hall and bathroom, and laminate wood in the downstairs bedroom, with a rug. Harvey has no problem with any of those surfaces.

Harvey runs for around 1.5 hours, which is plenty enough time to do a once-over in the house each day. Once finished he starts making his way back to the base station to charge. I have no idea how this works, but I love that it does. He seems to make a bee-line for the charger, but if he’s too far from it, appears to just follow one wall until he finds it.

He has a small blue removable hopper at the back. When cleaning is finished, simply remove that, tip it out into the dustbin, with a good tap. There’s a filter in there too, which can be removed and banged against the side of the bin to loosen up the dust. It’s pretty eye-opening and frankly pretty gross how much dust, cat fur, peanuts and other detritus Harvey can gobble up in one session. I’m certain if his battery was hot swappable and I sent him out immediately after emptying him, he’d still find more dust. 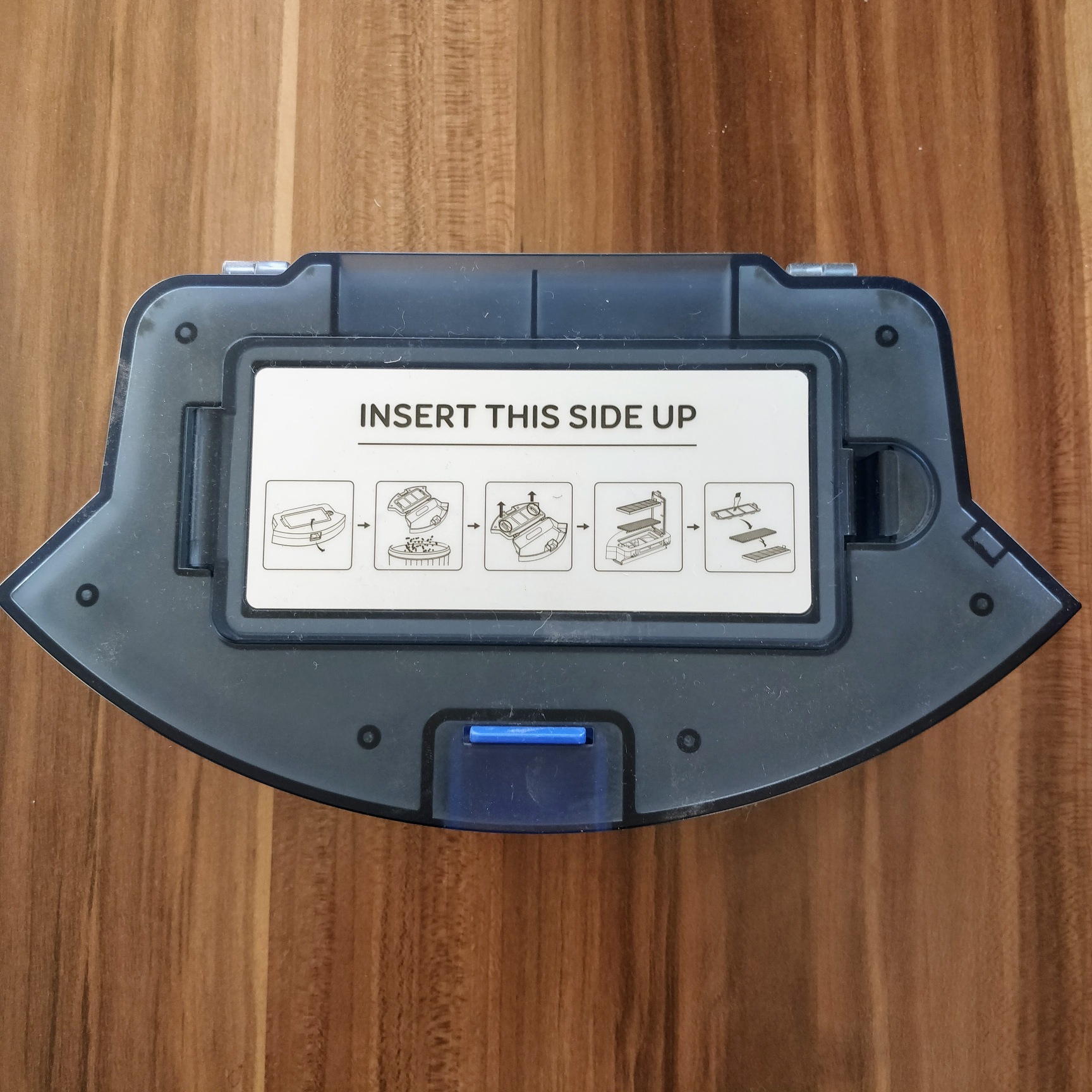 Harvey has a ‘cliff’ sensor. So I can carry him upstairs, press the button to start him off, and know he won’t drive off the landing down the stairs. I’ve seen him go perilously close to the drop a few times, but he detects the cliff and pulls back each time.

Harvey also integrates with Amazon Echo devices. So I can say “Alexa, turn on Harvey” and then there’s a remote “beep” somewhere and away he goes on a cleaning spree! I don’t often use this as he’s already going out every day for ~90 mins. But it’s a neat party trick to tell him to start or stop with your voice.

Having a human baby toddler in your house makes you re-evaluate all the grabbable things below 3 feet. Same goes with a robot vacuum cleaner. Once you have a robot rummaging around on your floor, unless you’re fastidiously clean and tidy (I am not), there’s going to be interesting things it will ‘find’ for you.

We used to use the underside of the sofas in the lounge as a bit of a dumping ground for toys, laptop bags and other stuff nobody wanted to look at. That changed pretty quick when Harvey arrived. Obviously having stuff under the sofa and not taking it out to clean regularly turns that zone into a dust magnet. Gross, yes. However, Harvey has allowed us to be the change we want to be. There’s nothing under the sofas any more. Thanks Harvey!

Indeed, once we removed things from under the sofa, the next few days Harvey’s collection bin was chock full of, well, under-sofa-stuff. You could potentially eat your dinner off the floor under our sofas now. I mean, you could. I wouldn’t, obviously.

Off the kitchen we have a ‘utility room’ which houses the fridge, dryer, shoes, and other mess nobody wants to look at. There’s a bit of a lip which I didn’t think Harvey could traverse. Wrong. Harvey ventured in and managed to get stuck on shoe laces, carrier bags, all sorts. This is where the supplied magnetic strip comes in. I simply cut a length and stuck it to the floor on the boundary between the kitchen and utility room. Harvey detects that, and never goes in.

Similarly one of the kickboards is missing in our kitchen under the sink. One morning Harvey found his way under the cupboard under the sink and got stuck. It was an awesome game of hide-and-seek that day! I eventually found him and put some tape along that gap too, so he doesn’t go there either.

In general, we had to take a good long look at ground level, and make sure there’s nothing down there Harvey might eat. Sometimes we missed something. Here’s some of the ways in which Harvey has got stuck over the last 3 months. 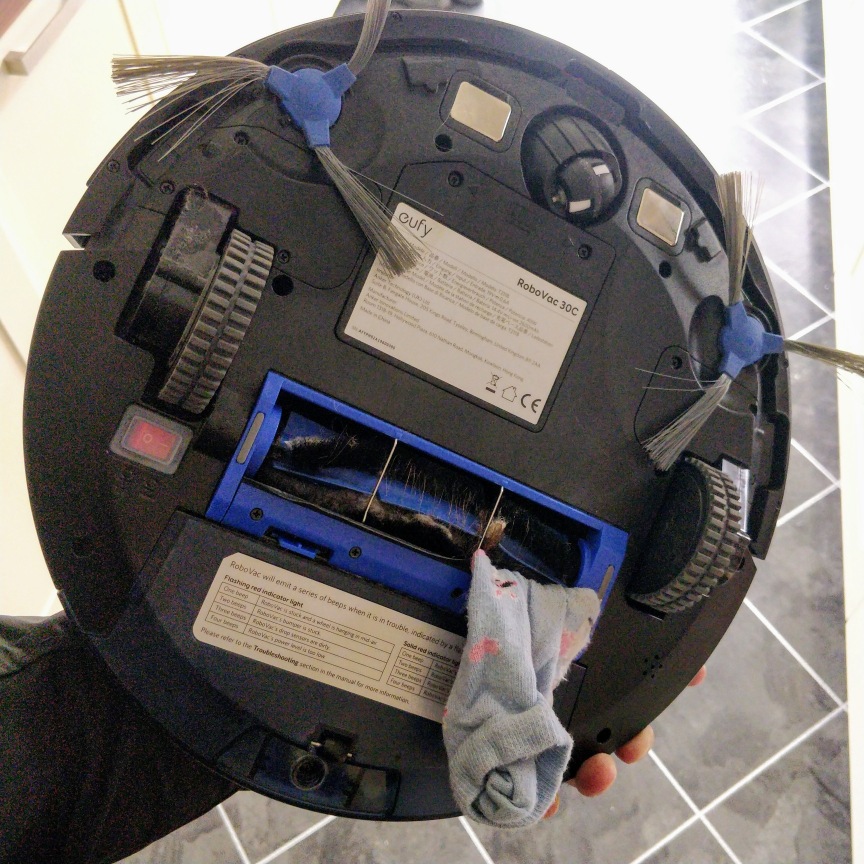 One day I took Harvey upstairs to do the bedrooms. He sent me a notification he was stuck. This confused me. Harvey seemed stranded on the border between the hall and bathroom. 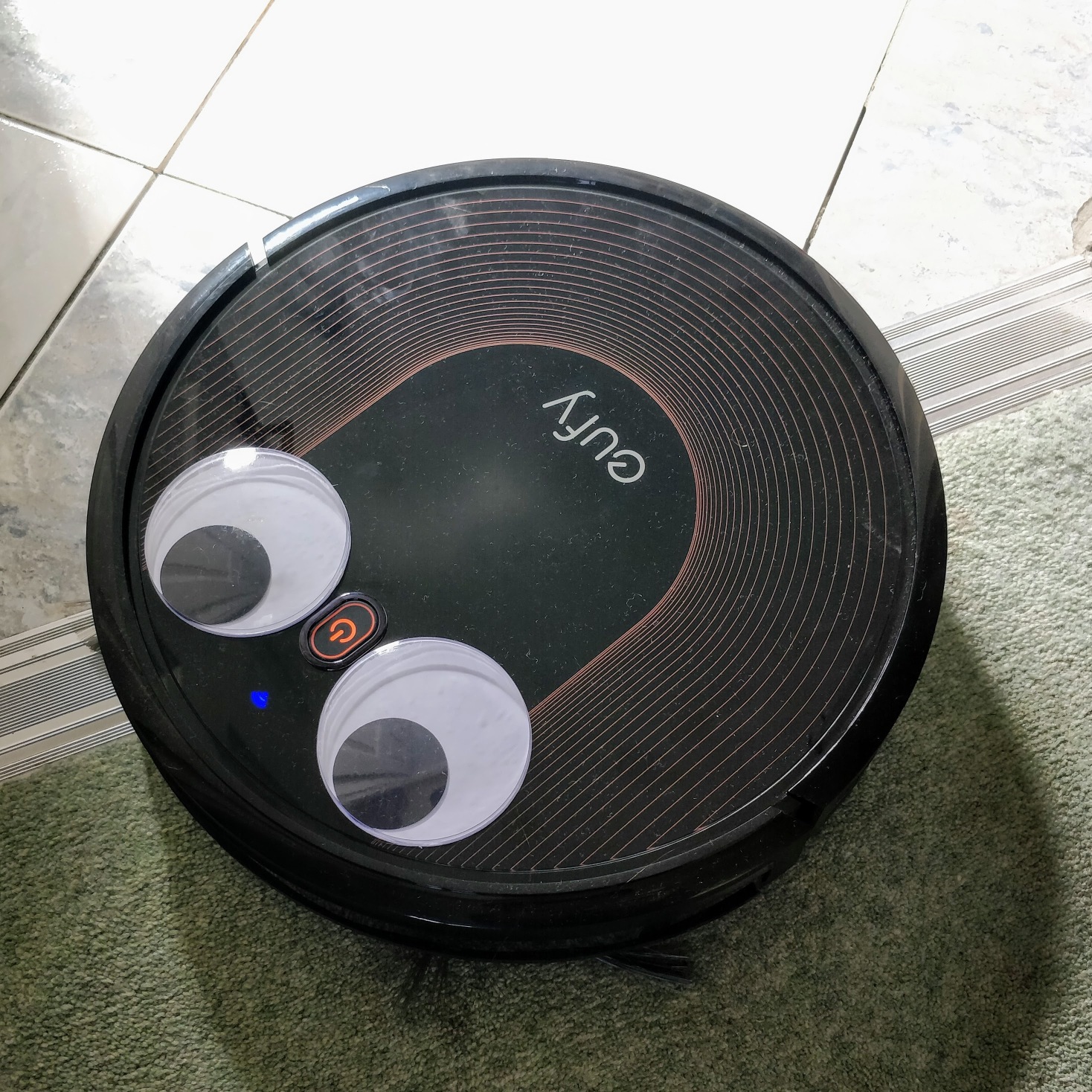 But no! Somehow he had managed to pull a screw up, then got stranded on top of it! 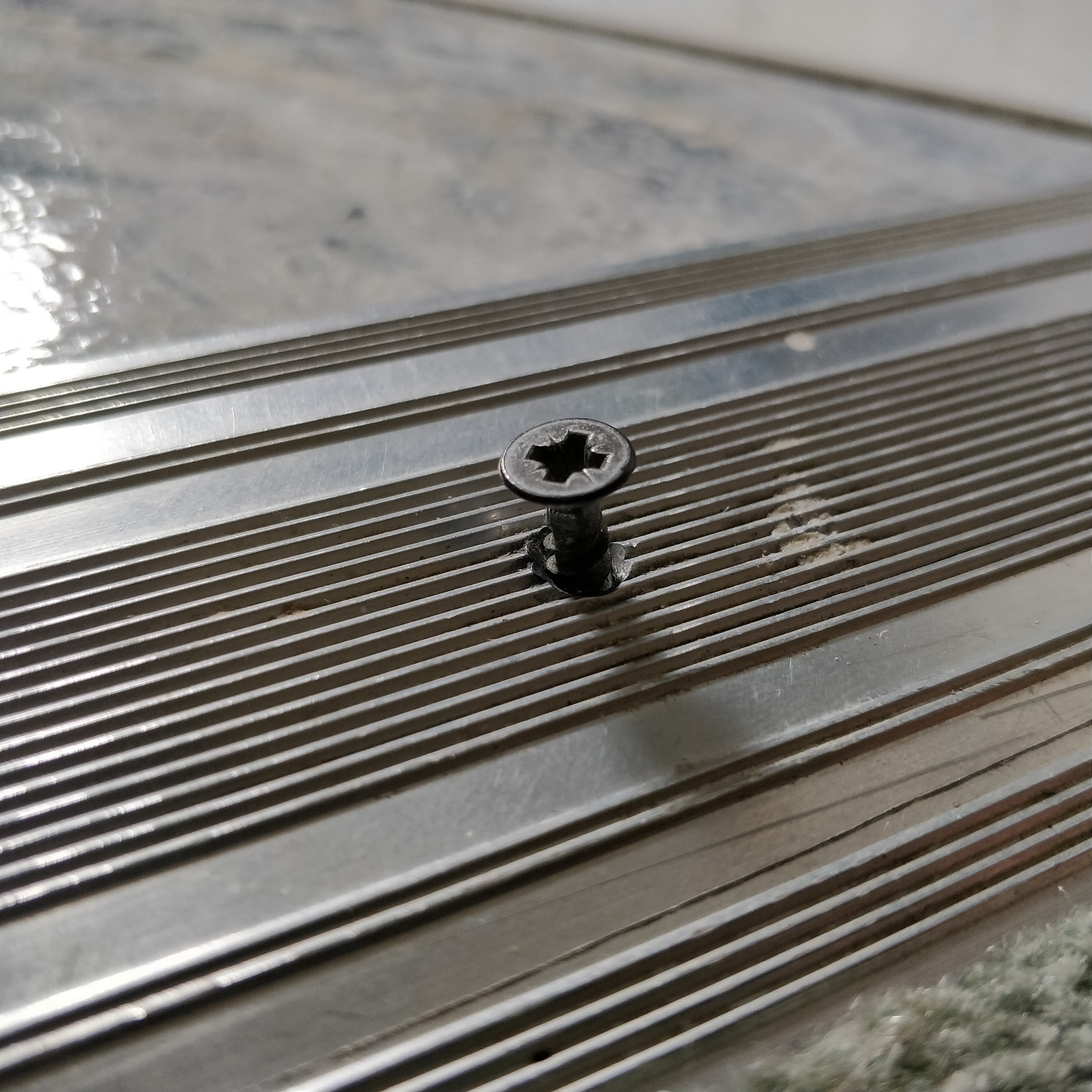 Sometimes he claims to be stuck, but actually isn’t visibly in any danger. Stupid attention seeking robot! 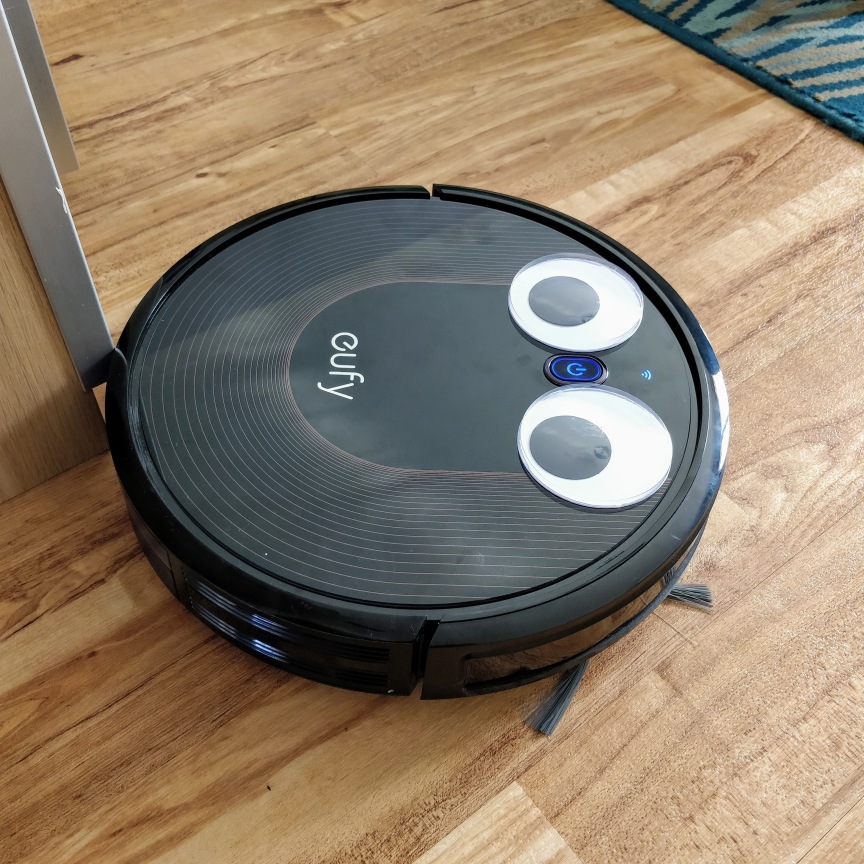 Christmas wrapping accessories are fun to get wrapped around your wheels. 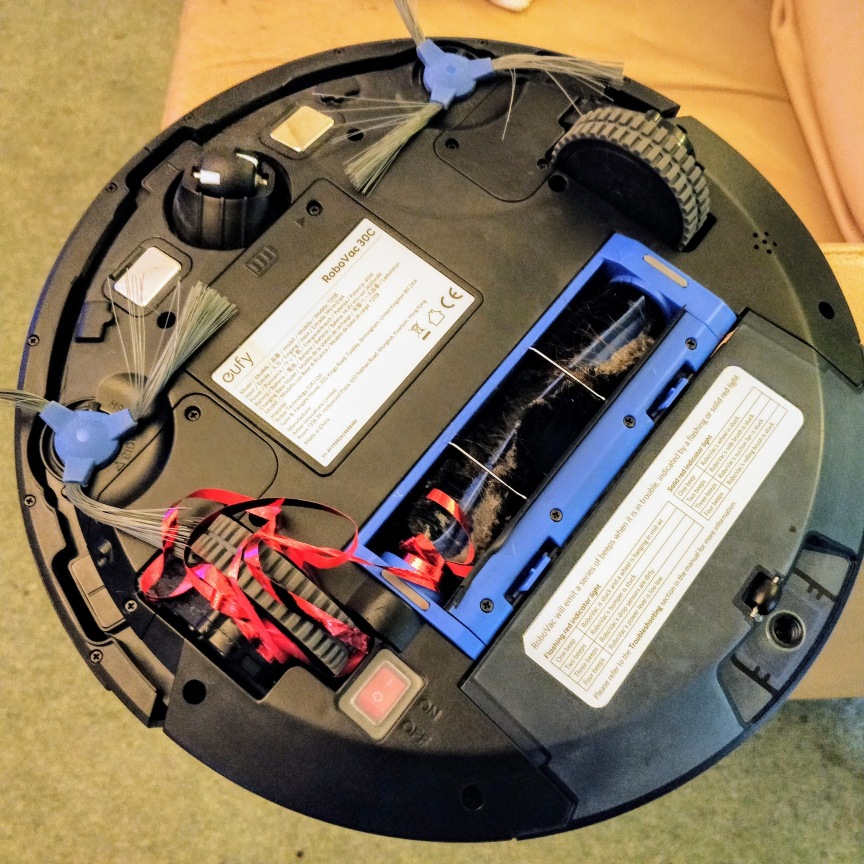 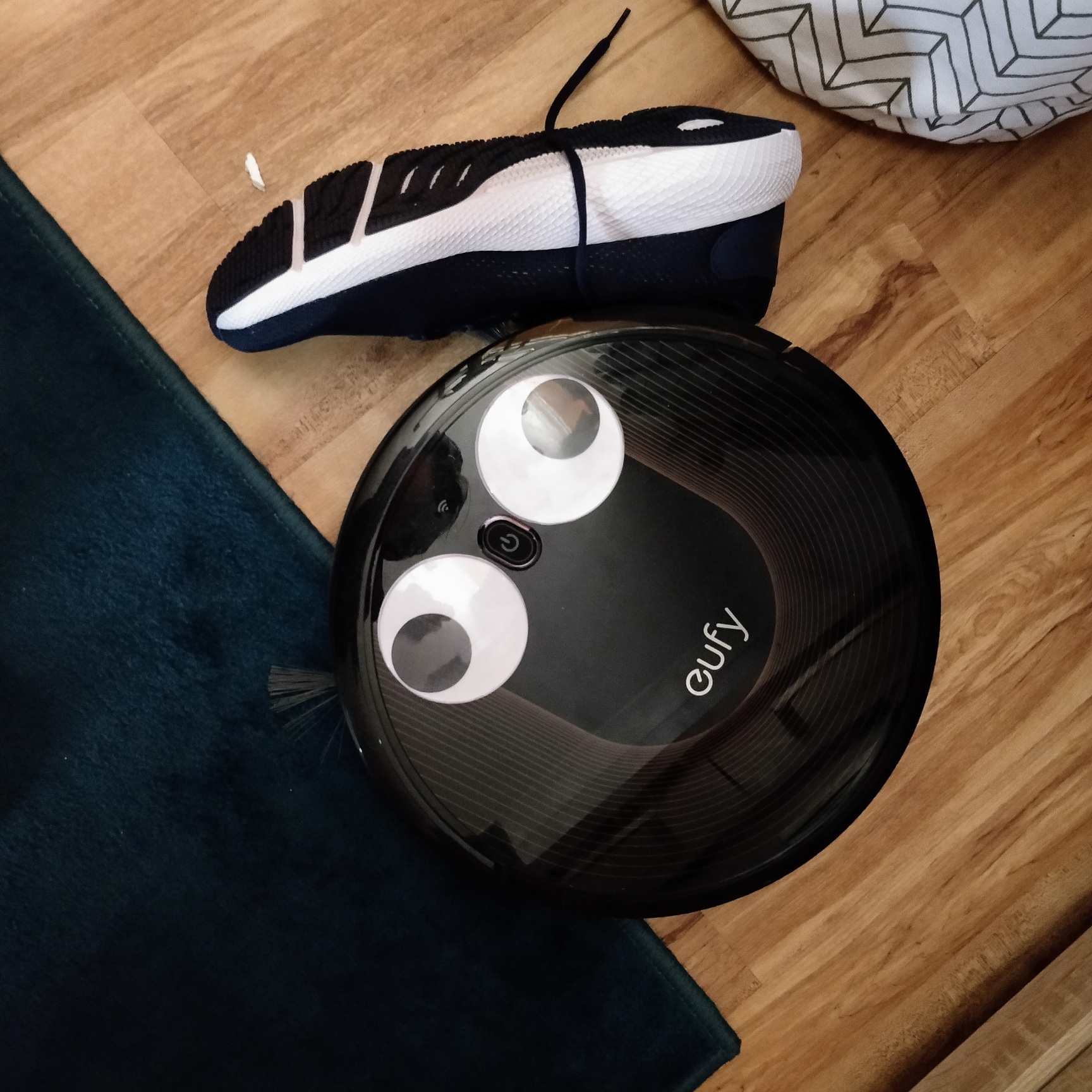 Cables are a common hazard. My DS charger: 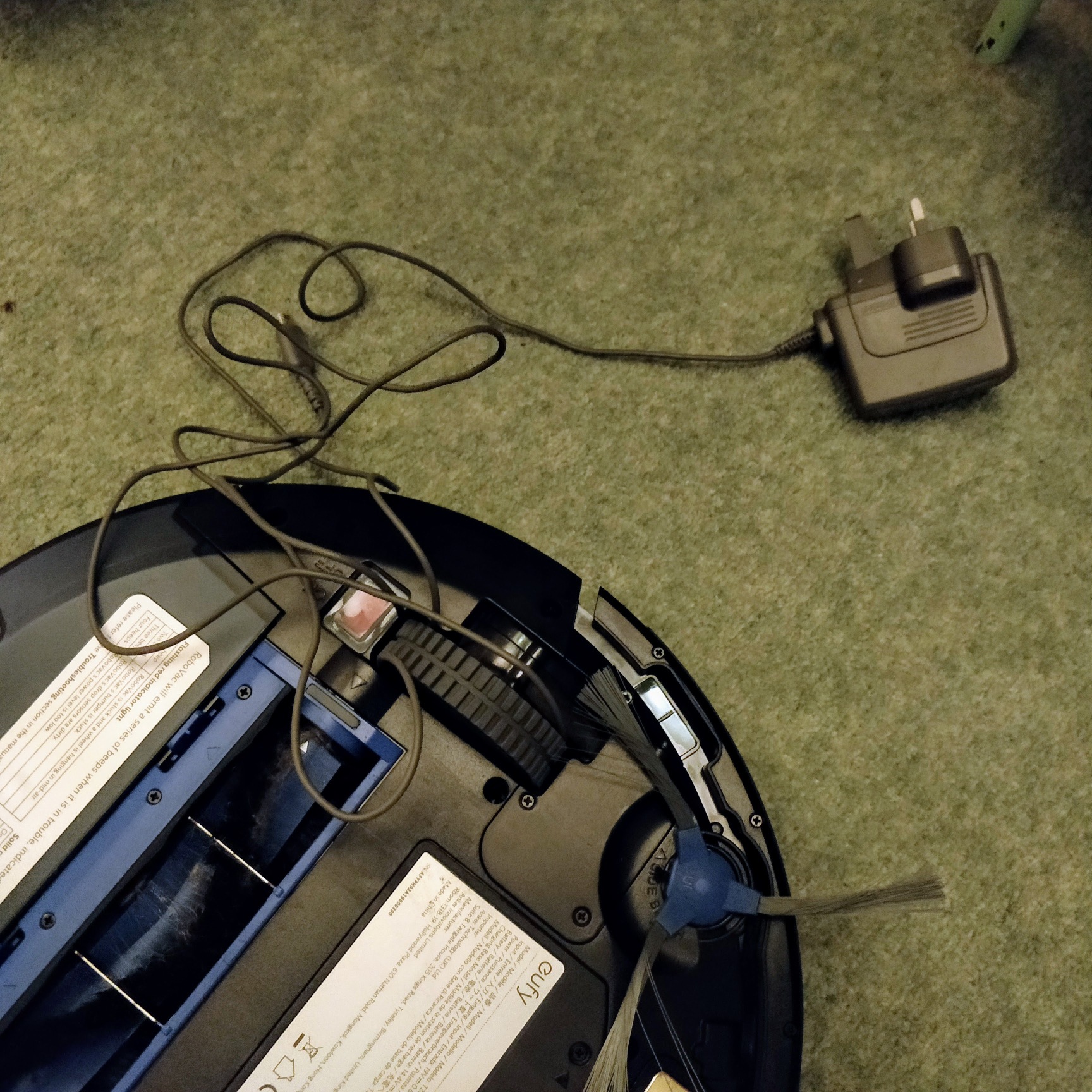 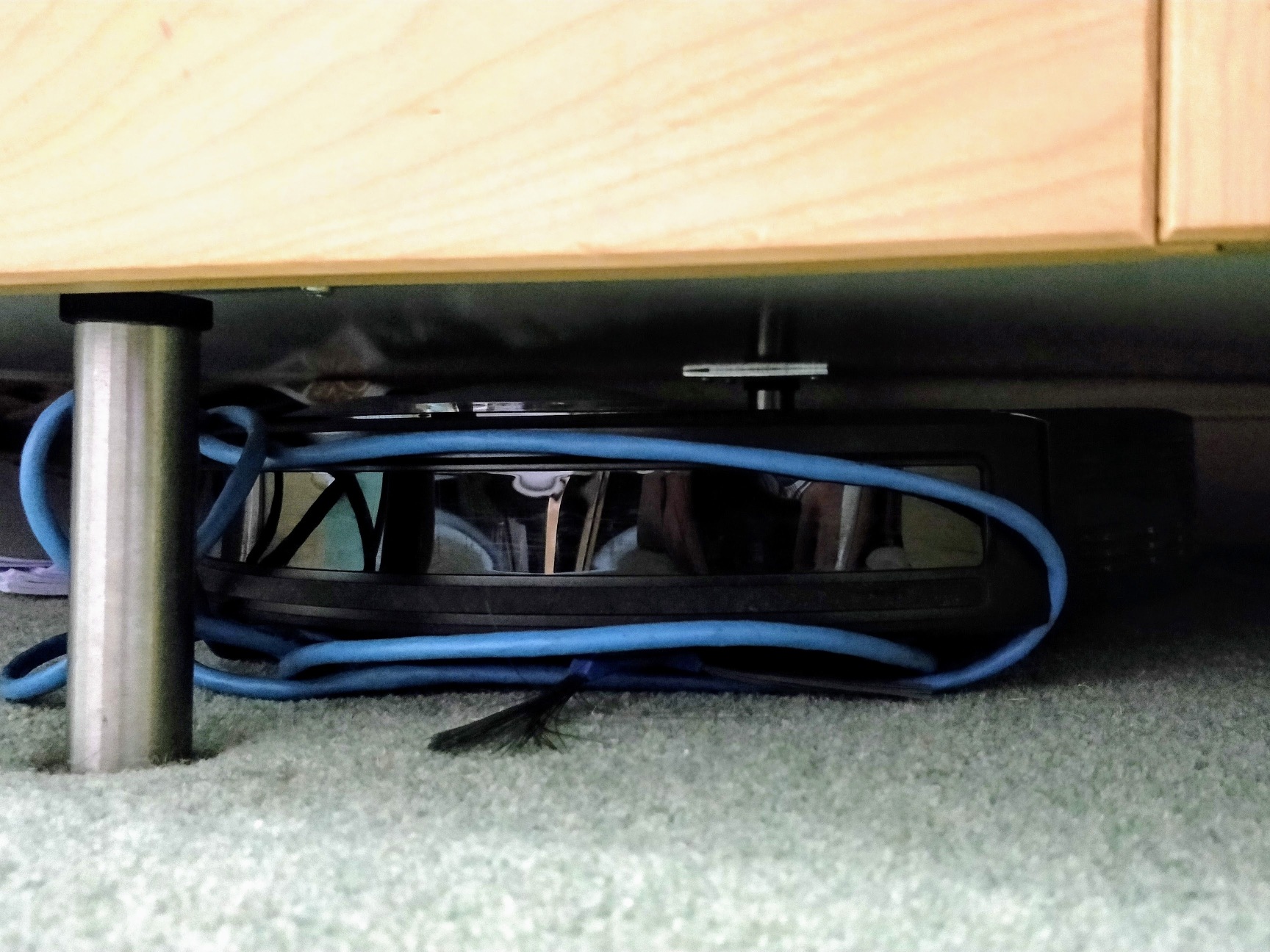 Even the cat’s toys aren’t safe. 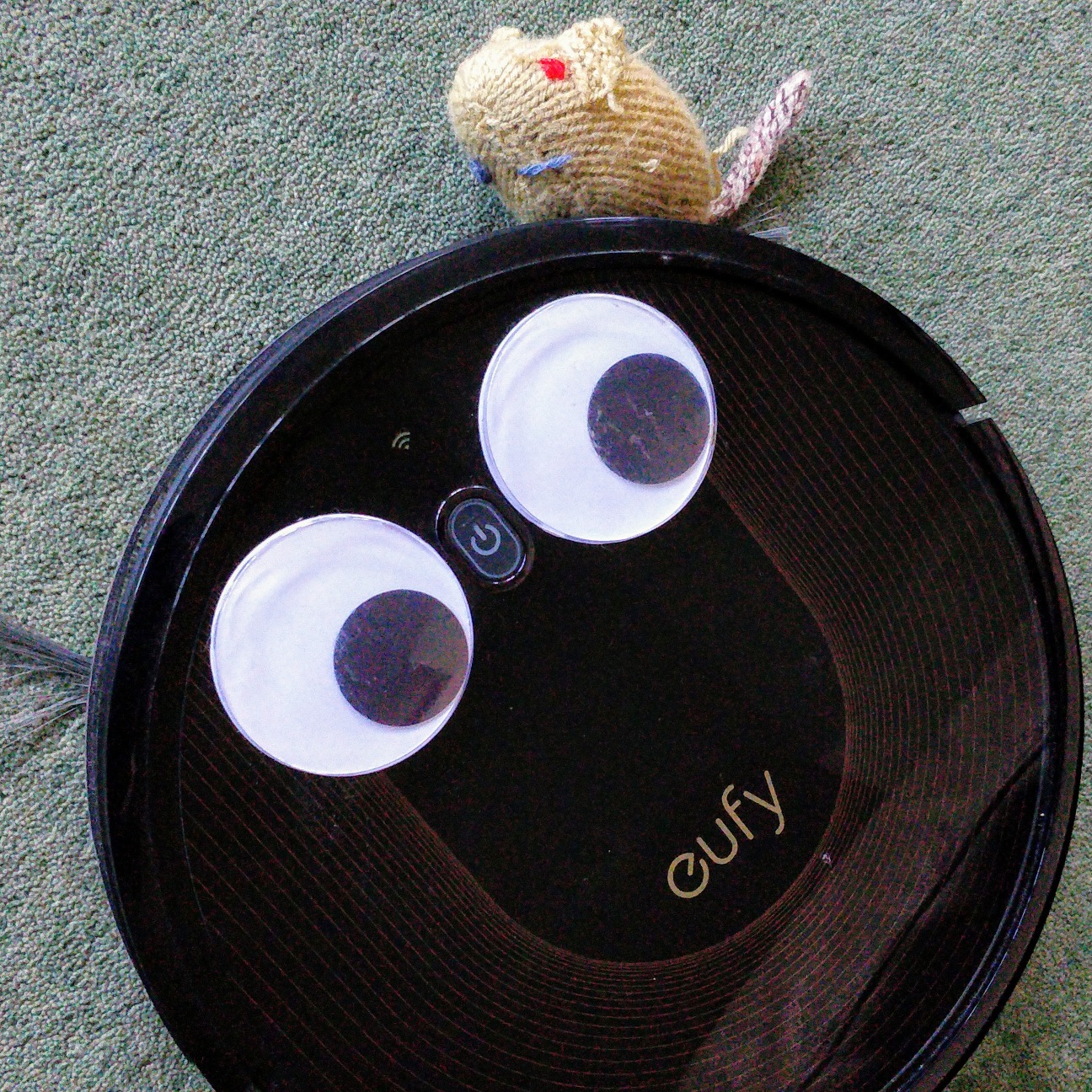 You’d be forgiven for thinking “Jeez, you have to babysit that thing constantly!?”. Well, yes, and no. If you make a bit of effort to lift ribbons, socks, cables and cat toys off the floor, you’re not going to have to worry much. While writing this blog post, Harvey has done a full clean and made it back to base uneventfully. That’s the norm. All I need to do is empty him.

Which leads to the obvious next question, “how much does he pick up”. You asked. Here’s what it looks like after a couple of days. Ideally I should have emptied this before today’s run, after every outing, but I forgot yesterday. 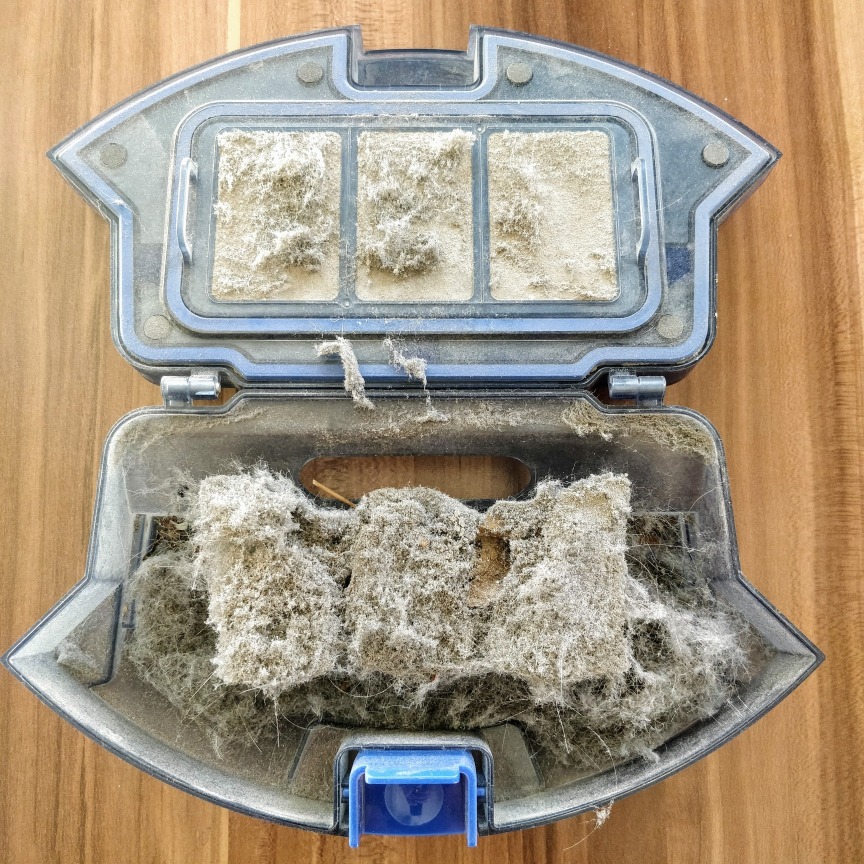 Gross, huh? The hair, dead skin and fur of 3 humans and a cat, collected in a plastic box. Neat.

But also, “yay” all that crap isn’t on my floor anymore.

Harvey is a bit noisy in operation. Not so loud that you can’t have a conversation with him in the room, but it’s noticable. This is why I stopped having him clean at 3am. My bedroom is on the ground floor, so having him come in soon after 3am would wake me up. That didn’t last. It’s also helpful to have him clean during the day, so if he gets stuck, some can free him quickly.

The charging station is a little lightweight, so Harvey can easily bat it to one side while he’s starting or heading home, making it harder for him to actually get back home for a re-charge. I have considered screwing the base station to the wall, but not done that yet as I had to move the base for the Christmas tree this year. Perhaps once the decorations go away I’ll do that. I tried using strong tape to attach the base to the skirting board, but that didn’t last long.

Obviously as Harvey is a floor-dweller, he’s never going to clean high up surfaces, mirrors, walls or other floors. So it’s still reasonable to expect you to clean those separately. However, if you do that a while before Harvey starts, he can pick up the dust which ends up on the floor. So he is helping.

You do need to clean him now and then. Hair gets wound around the brushes, as you can see from the photos above. The maintenance is pretty easy and doesn’t need doing too often, given he’s running every day for 1.5 hours.

Get one. This is one of the most joyful, practical things I bought last year.