On 11th July 2012, the Ouya burst onto the scene via popular crowdfunding site - Kickstarter. It was billed as “A New Kind of Video Game Console” which sold for $99/£99 at launch. It was essentially an Nvidia Tegra 3 based ARM System on Chip crammed into a tiny box which sat under / near your TV and was operated with supplied bluetooth game controllers. They far exceeded the target of $950,000, reaching $8,596,474, setting some high expectations among the backers and interested onlookers. 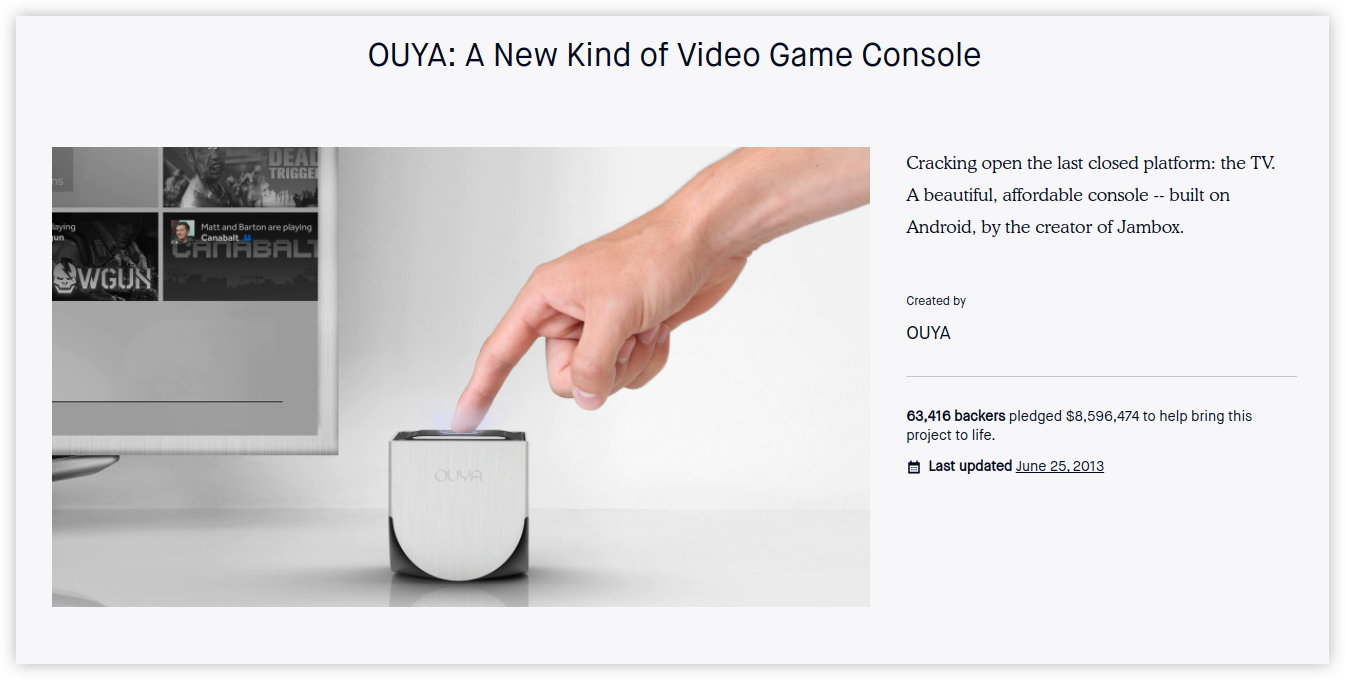 I impetuously backed it the next day for $99 plus $20 shipping and $30 for a second controller. 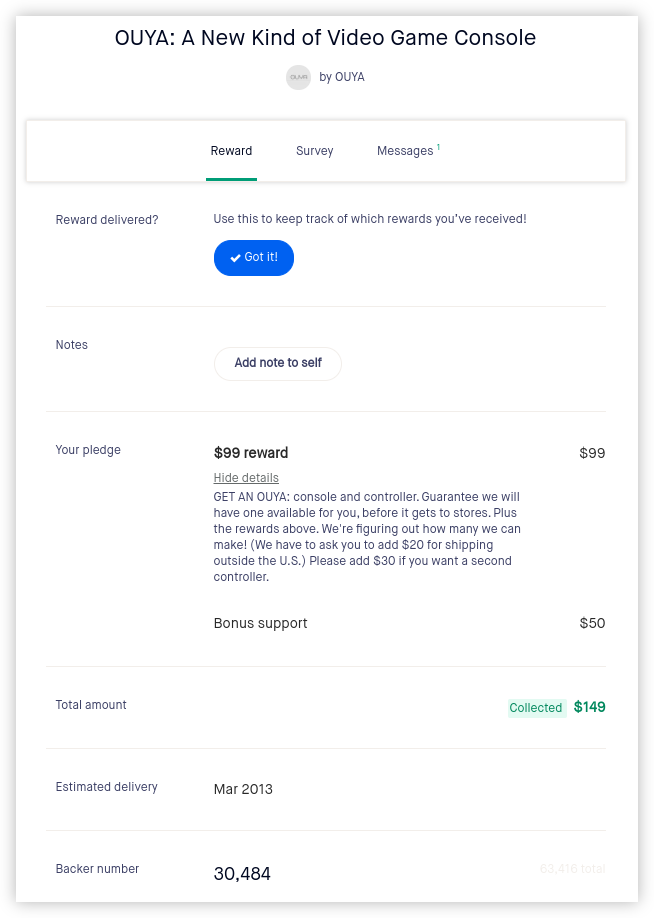 After some mis-steps and mistakes, the backer devices finally shipped. 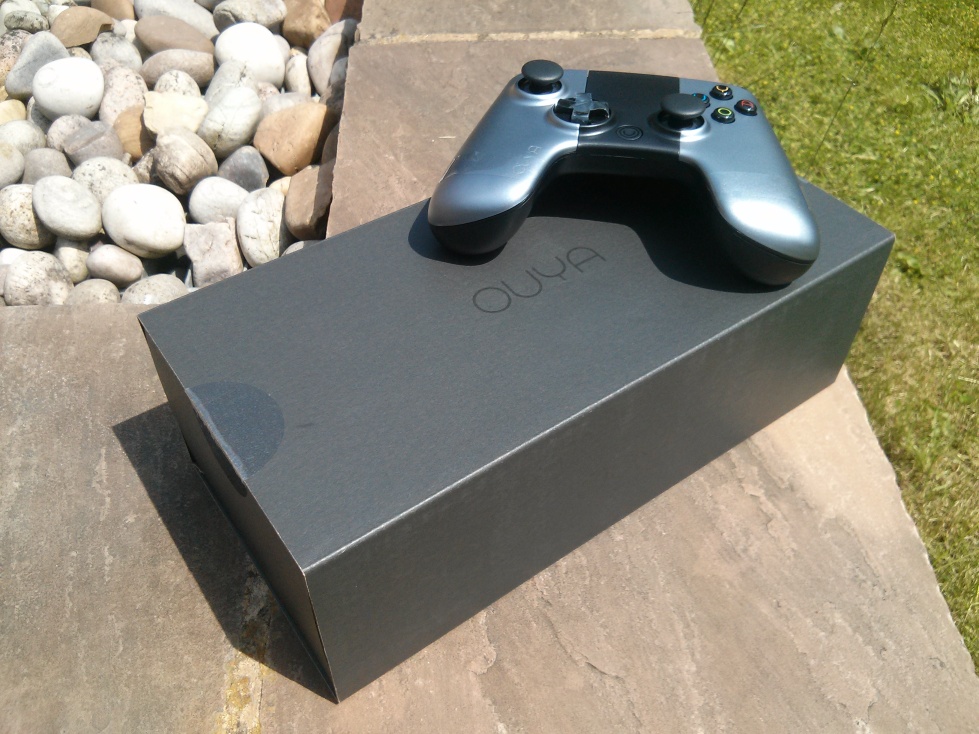 Mine arrived only a week or so before they started appearing in retail outlets. I was a bit surprised to see the Ouya marketed in my local Game store. 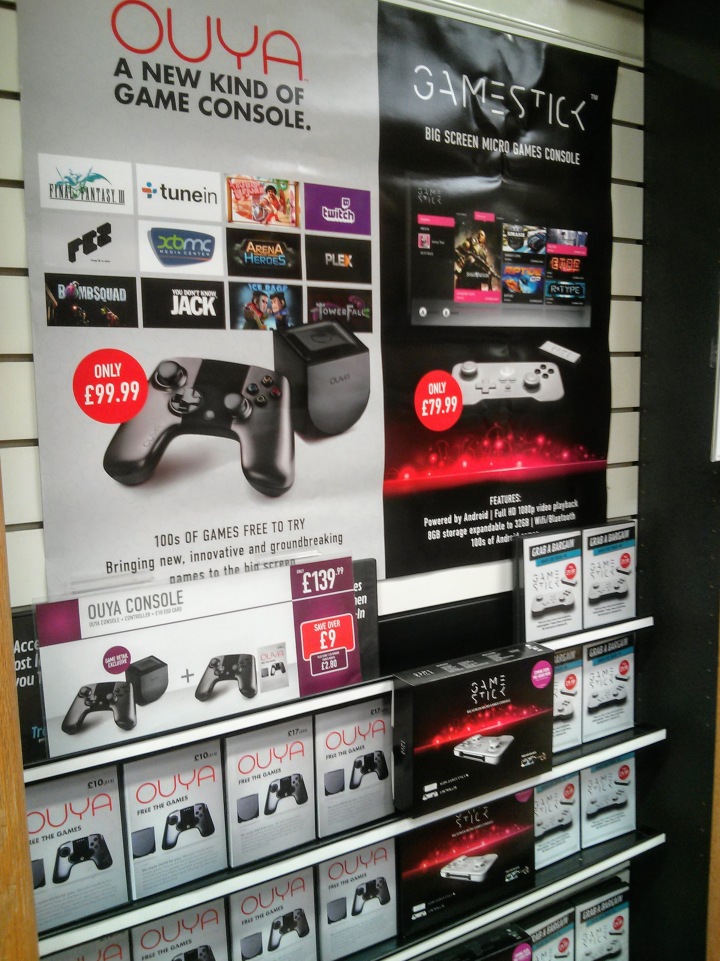 The woman behind the counter said they’d sold some and the guy there was more interested in the emulation side than native games. I got an extra controller so I can play some games with the kids. This was a good move.

The device had an easy to use custom 10 foot UI and store front to discover and install games and applications. It ran on top of Android, and performed pretty well for the price. Mine only had 8GB storage, but you could add more using a USB port on the back. 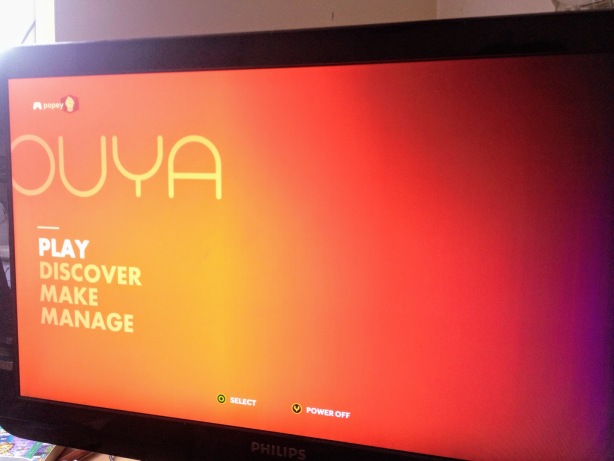 The developers had a sense of fun too. Here’s the update process running.

Games in the store had free demo versions with an option for developers to publish paid variants. There weren’t enough paid applications in the store to sustain the platform or the developers it seems though.

Sadly the company failed to generate enough revenue from device or game sales, and later closed down with Razer acquiring the assets.

There was one killer-app for the Ouya - Towerfall - a launch exclusive for the console. A four player local multi-player game where you fire arrows at eachother, collect weapons, defences and avoid traps, Towerfall is almost perfect. Sat on the floor of my office, the three of us played that game to death.

Another favourite for us was Bomb Squad, another multi-player party game. This mostly consisted of throwing explosives at eachother, or teaming up to attack waves of enemies in successive rounds, with bombs. We had so much fun with Bomb Squad over the short lifespan of the Ouya, it was a super-fun hit for us. 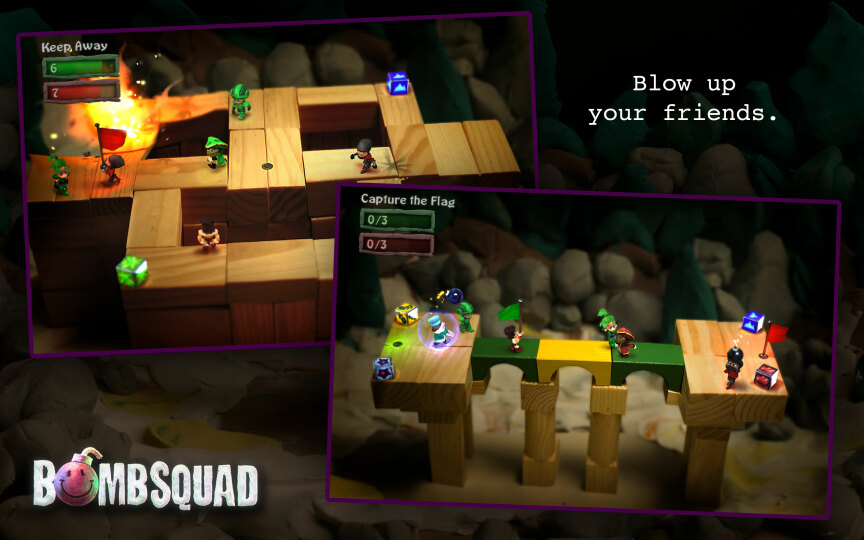 The Ouya had a bunch of much smaller indie titles too. No Brakes Valet was one we discovered which was ridiculous and fun in equal parts. 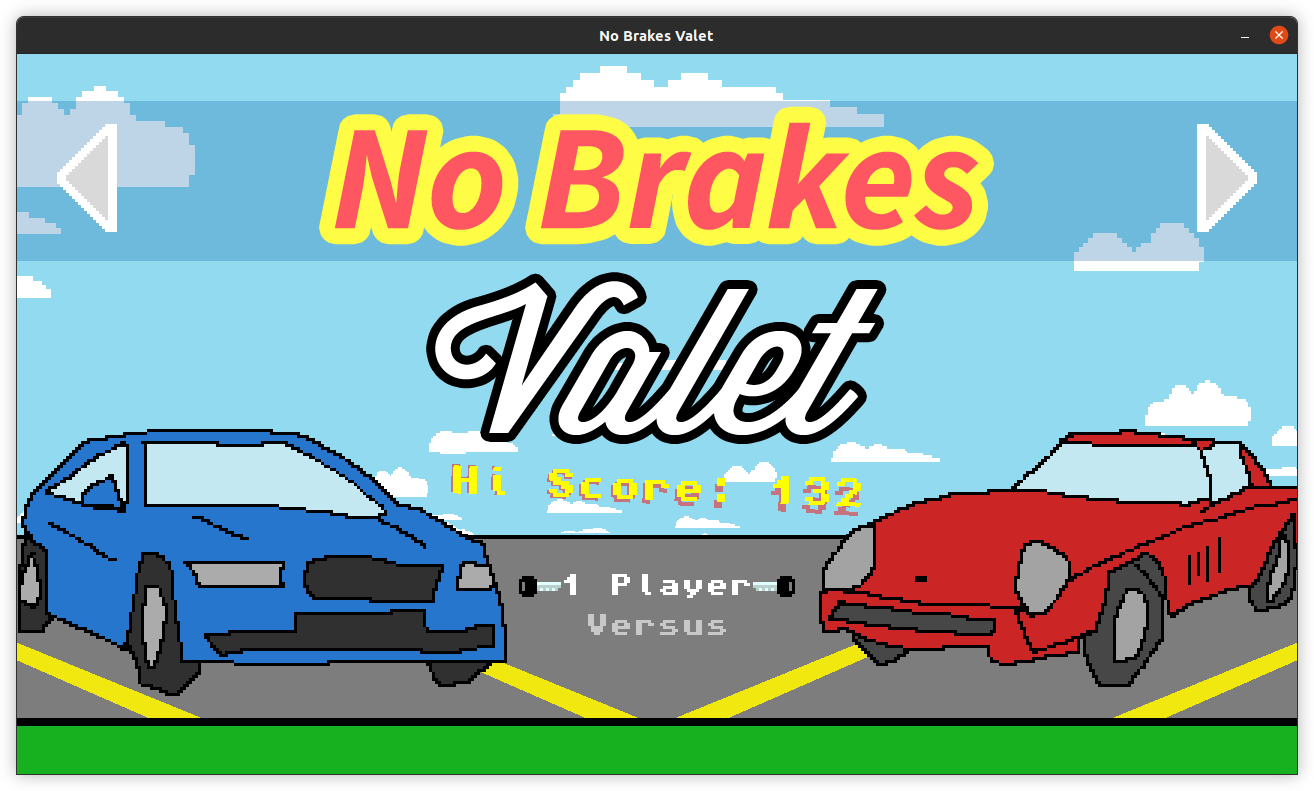 You’re each a valet trying to arrange vehicles in car parks. The cars have limited control, coming into the screen at speed, with minimal or (hence the title) no brakes. It’s stupidly fun and frustrating as a car barrels onto the screen, knocking other vehichles out of their spaces. 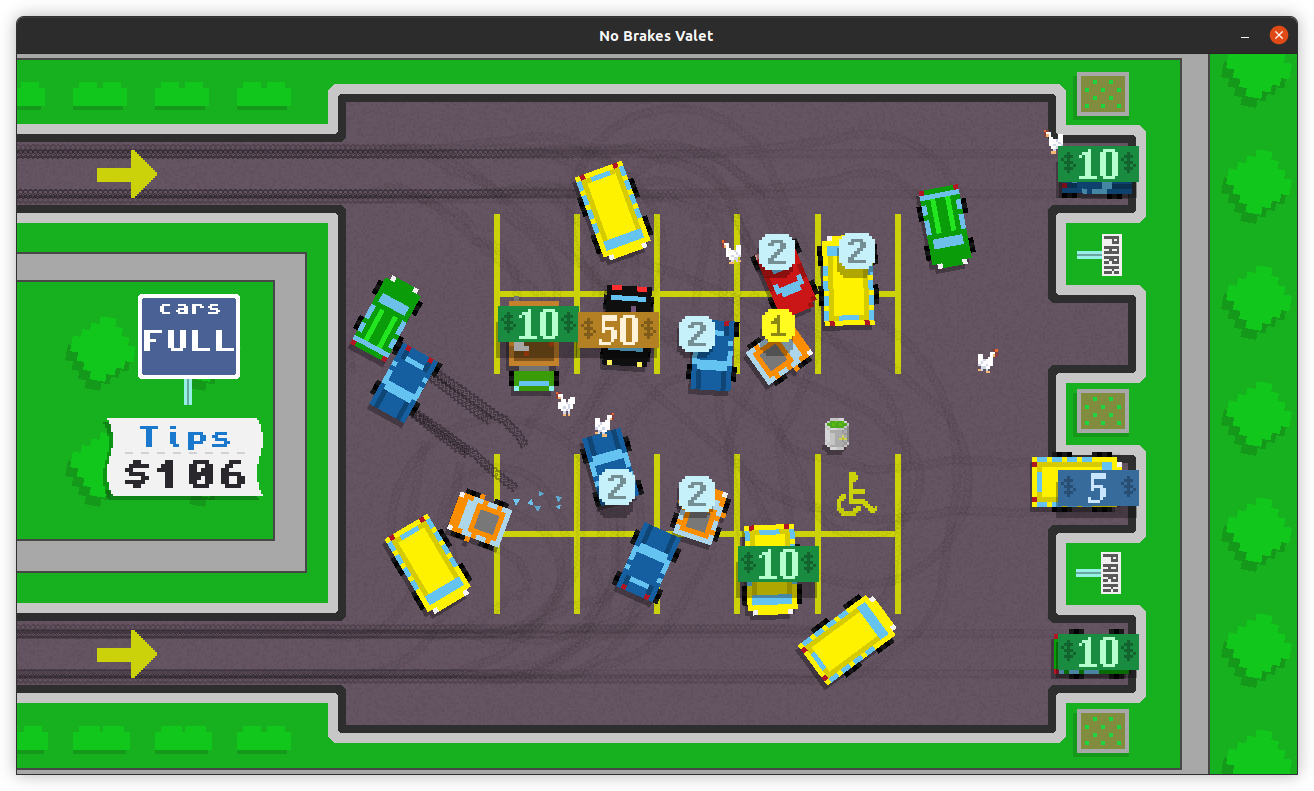 No Brakes Valet is now available for Windows (it works perfectly under WINE on Linux too) for $2 on itch.io if you fancy some parking fun!

So why do I consider the Ouya it a success despite the obvious commercial failure?

It was the first console in my house which had really entertaining multiplayer games I could pick up and play with the kids. I’ve had (and still have) other consoles before it like the SNES, N64, GameCube and Wii. They’d certainly played with the Wii, which we’d had since 2007. But the Ouya experience was different.

The Ouya arrived in our house as the kids were 6 and 9 years old, and had a little gaming experience already. They were interested in seeing what it could do. We discovered the above games together, learned the skills and trash talked while we beat eachother. All these games gave us such happy times, playing together, driving into eachother, shooting eachother, and bombing ourselves to bits.

This experience led to us playing more together as we all enjoyed the games, which we all still do, to this day.

The Ouya has long-since been consigned to the Attic of Dusty Retro Devices, but it’s spiritually been replaced by the SteamLink and Steam Controllers in the lounge. We still play TowerFall and also often enjoy Ultimate Chicken Horse, Gang Beasts, and more recently Unspottable, via Steam.

On a Sunday night when there’s nothing on TV and we want to have a bit of fun and let off some steam, this is how we do it. I consider Ouya being instrumental in getting us playing more together.