In my messy office I have a main desk I work at. I have two portait displays on a hefty, but inexpensive BONTEC Dual Monitor Stand (affiliate link), clamped to the back, to lift the monitors up off the desk. The monitors are 3-year-old, low-end 24" ASUS VS248HR (affiliate link) “Gaming Monitor’s” 🤣.

I recently bought a Raspberry Pi 400 which also sits on my desk for quick-release arm64-action! The problem I have had with other Pi’s is the spiders web of cables needed, and additional keyboard. So when the Pi 400 came out, with integral keyboard, and ports all aligned at the back, I snagged one.

I like not having to unplug/replug cables when switching devices, but rather just grab the machine and start playing. The ASUS monitors only have one HDMI port each, and I like using both monitors. I’d also like to sometimes use two monitors on the Pi. I don’t have room or money for four monitors! So I needed an easy solution.

This HDMI switch (affiliate link) is the solution! 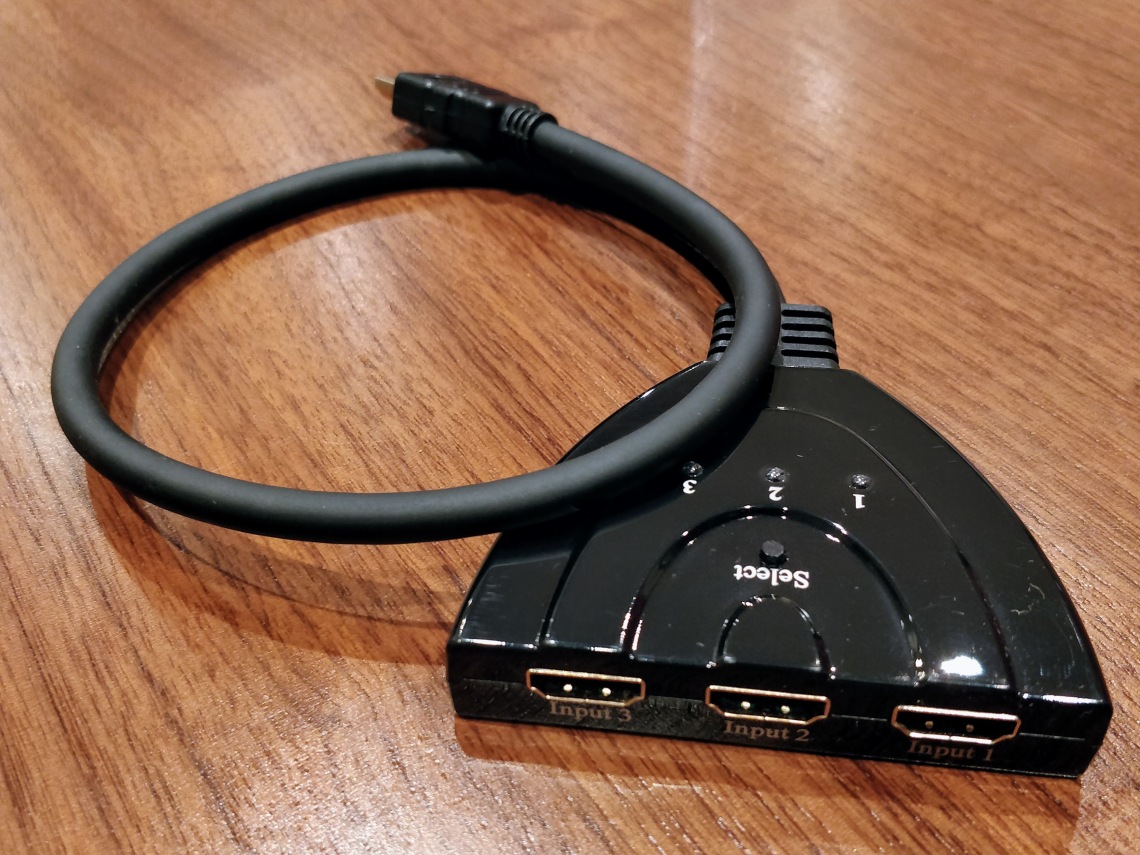 Simply plug the HDMI plug end into the monitor, then attach each PC & Pi HDMI cables each to one of the HDMI input sockets. There’s a little ‘Select’ button on top of the device, along with an LED indicating which input is currently active. A press of the button cycles through each input in turn. The device takes power from the HDMI connection, no external adapter needed.

The thing I like about this, is when the button is pressed, the connection to the display for the disconnected input is completely severed. This may sound obvious, but I’ve found some switches which don’t do this. The result is when I switch one display from “PC” to “Pi”, the OS on the PC re-formats the displays back down to one monitor. When I switch that monitor back from “Pi” to “PC” it reconfigures back to a two-monitor setup and all the windows move back to the right place.

The HDMI switches have a fairly short cable, but long enough that I can stick them to the wall behind the monitors. That way the button is facing me, and is reachable with a quick finger-poke. If I want I can switch only one monitor, and juggle the keyboards around to have one keyboard for the PC, and the Pi 400 next to it. Using both side by side makes me feel a little bit like this individual.

Alternatively if I want to do some dual-monitor work on one - most of the time that’s the PC - I can just hit the switches to rotate through each attached monitor to have both on one device. It’s a compact and neat-ish (modulo cables) solution. There’s even a third HDMI connection on each one, in case I want to put, I dunno, a Nintendo Switch or something on my desk. 😃

So if you’re looking for an HDMI switch to connect multiple devices to a monitor, this one might be suitable.