Today, I’m following along from an earlier article “The Allure of The Terminal” where I talked about how I love the terminal aesthetic. How much, well, one of my computers is a command-line only install. I thought I’d talk a bit about that setup. Firstly, it’s not command-line only because it can’t run a graphical environment, although it isn’t a super modern system. It is certainly capable of running Ubuntu MATE, for example, I just choose not to. 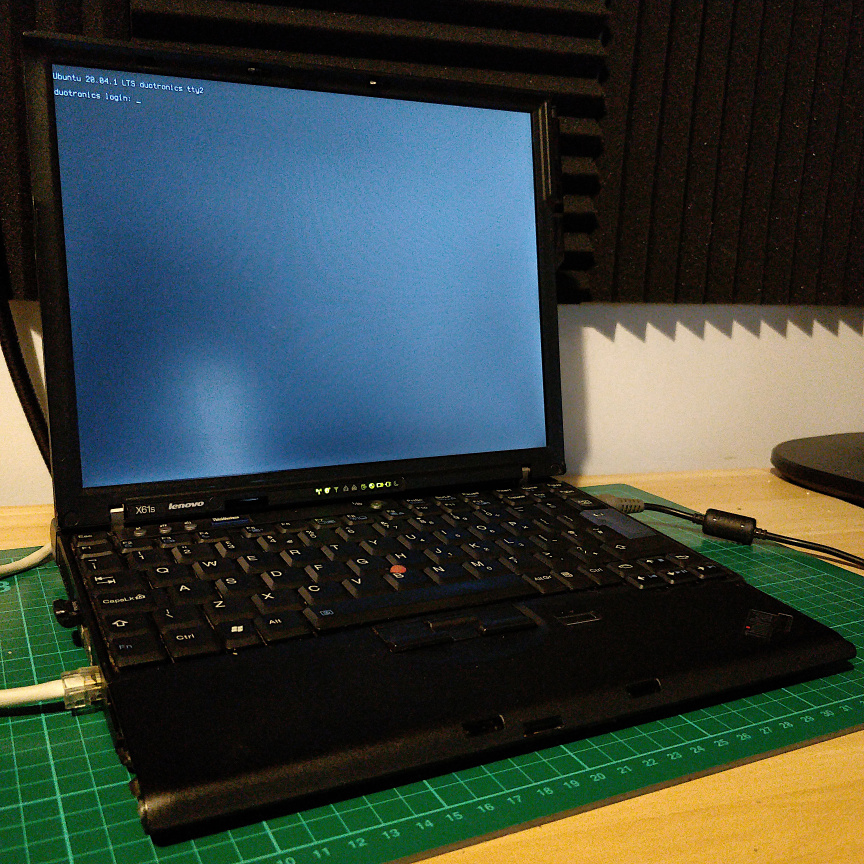 I configured system for “daily use” - as much as I can. Bear in mind this is a fun project to see if it’s reasonable to work from a non-gui machine.

I actually gave a lightning talk presentation on this subject at OggCamp 19 called “All GUIs Suck” - “Use the terminal - be productive”. I used this very laptop to present on a projector via VGA (no HDMI here!) and it seemed to go down well, for a bit of fun. Here’s roughly what that looked like. 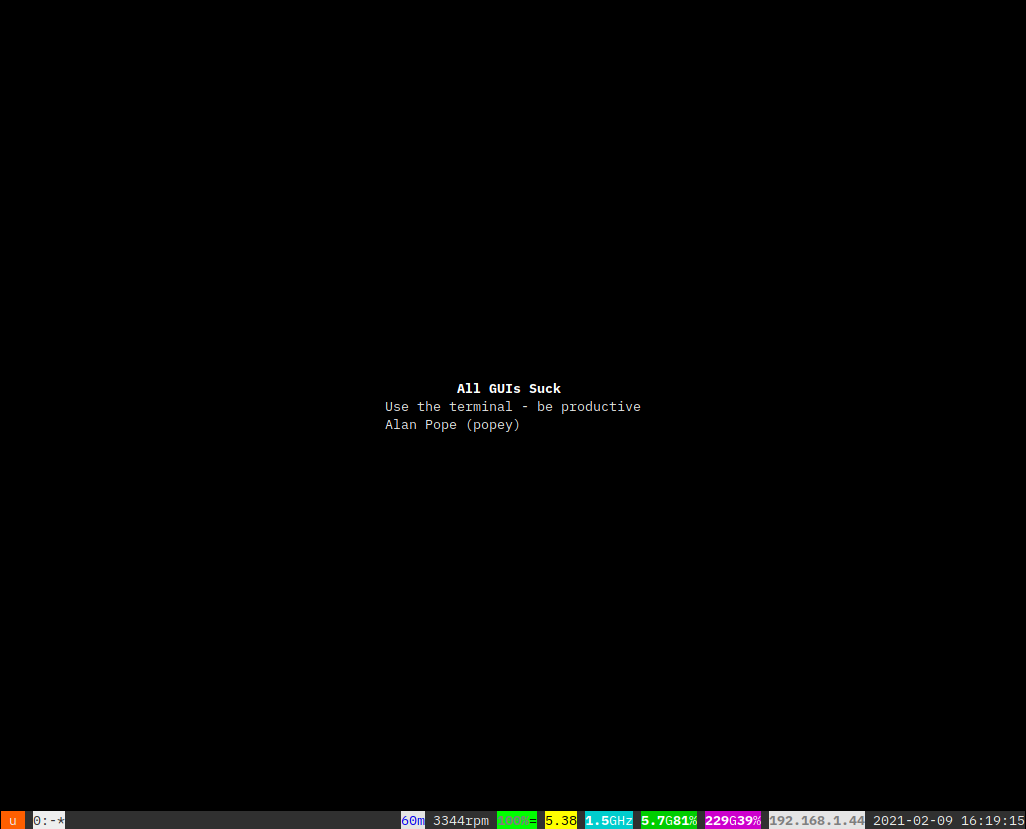 It’s my suggestion that it’s still entirely possible to be productive and have fun in a command-line only environment. None of this will be surprising, I suspect, to anyone who has used Linux for more than about 15 years. If you were using Linux in anger before the early 2000’s you probably knew the pain of having no GUI, or maybe even chose to do so, as I have here. So let’s look at the broad categories of software and how they might be used.

As mentioned, the install is a pretty standard Ubuntu 20.04 LTS Server setup. I’ve installed a bunch of software from the Ubuntu archive, and some from the Snap Store. A fair number of snaps are ones I actually maintain. Here’s the current list. We’ll delve into some of these in more detail below. 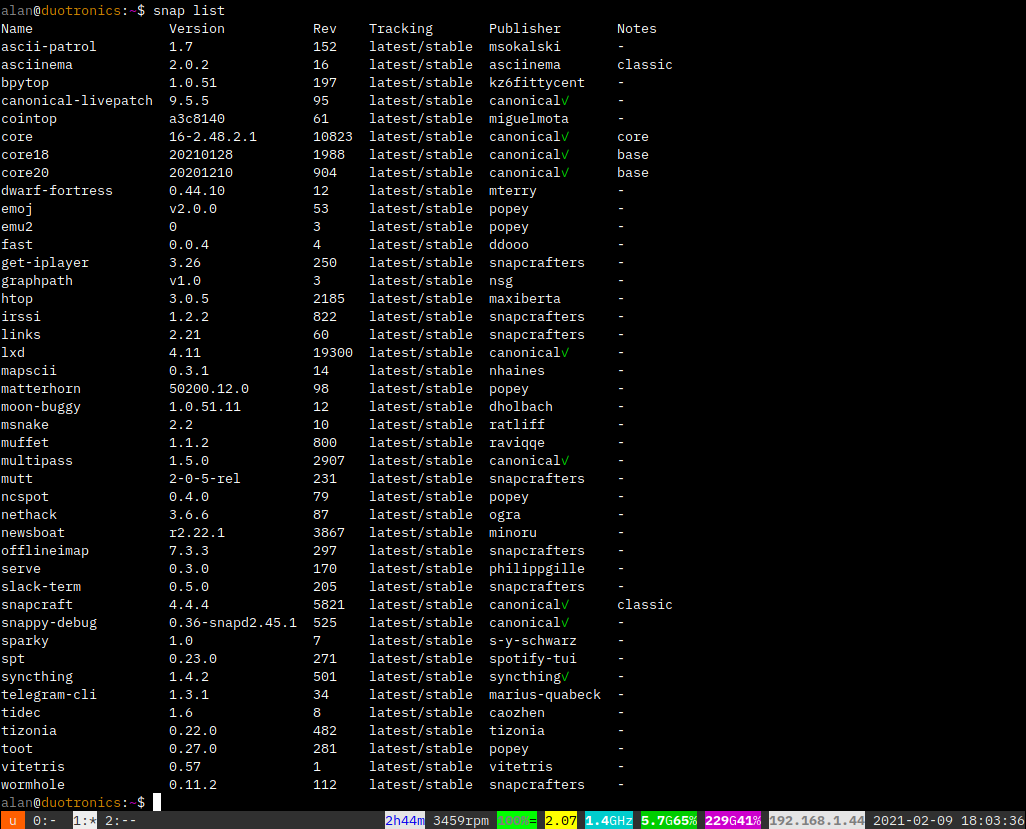 I tweaked the font to be smaller text, so I can fit more in. On Ubuntu a quick sudo dpkg-reconfigure console-setup allows for this simple change.

The X61s has an ethernet port, and onboard wireless. Mine even has a cellular data option, which I’ve never used. Configuring the wireless network from the command-line used to be a pain. These days we have tools like nmcli and nm-tui which make that task easy. 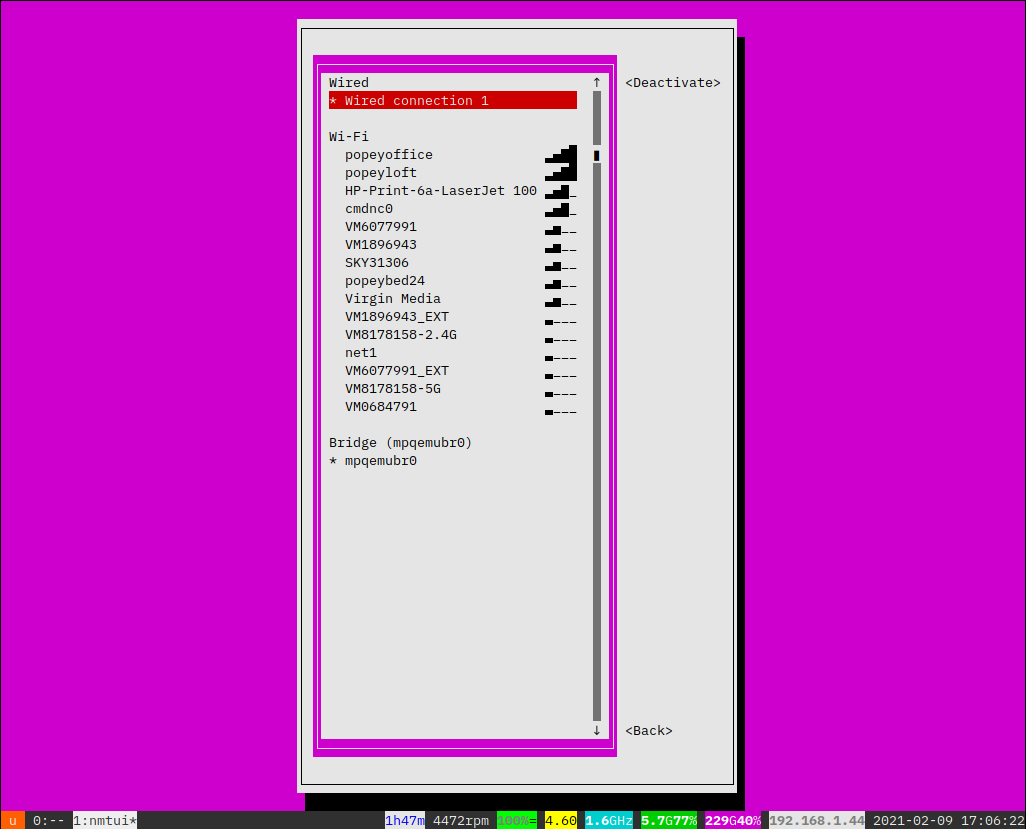 Testing the connection is easy with fast, an alternative to the commonly-known speedtest-cli. Great for testing the maximum throughput without needing a web browser.

On a graphical environment you can of course open numerous terminals and arrange, tile or tab them to keep numerous things open, and easily switch between them. I use the fabulous byobu on my laptop to the same effect. Under the hood it uses tmux, where it previously used GNU Screen.

Once byobu is installed, the online help and configuration is launched by pressing [F9]. 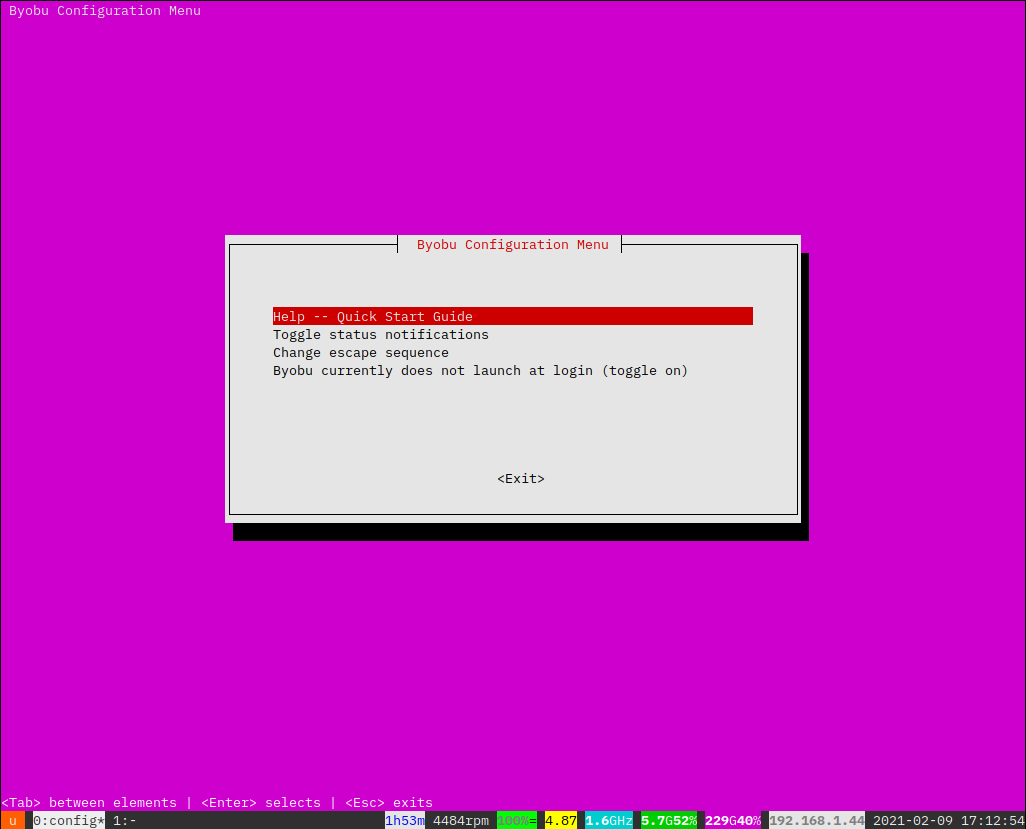 As well as window management, byobu has configurable status bar notifications along the bottom of the screen. These can be individually flipped on and off. I usually have the battery gauge, CPU, disk usage, IP address and date & time. This leaves a little room to the left to show the list of windows. 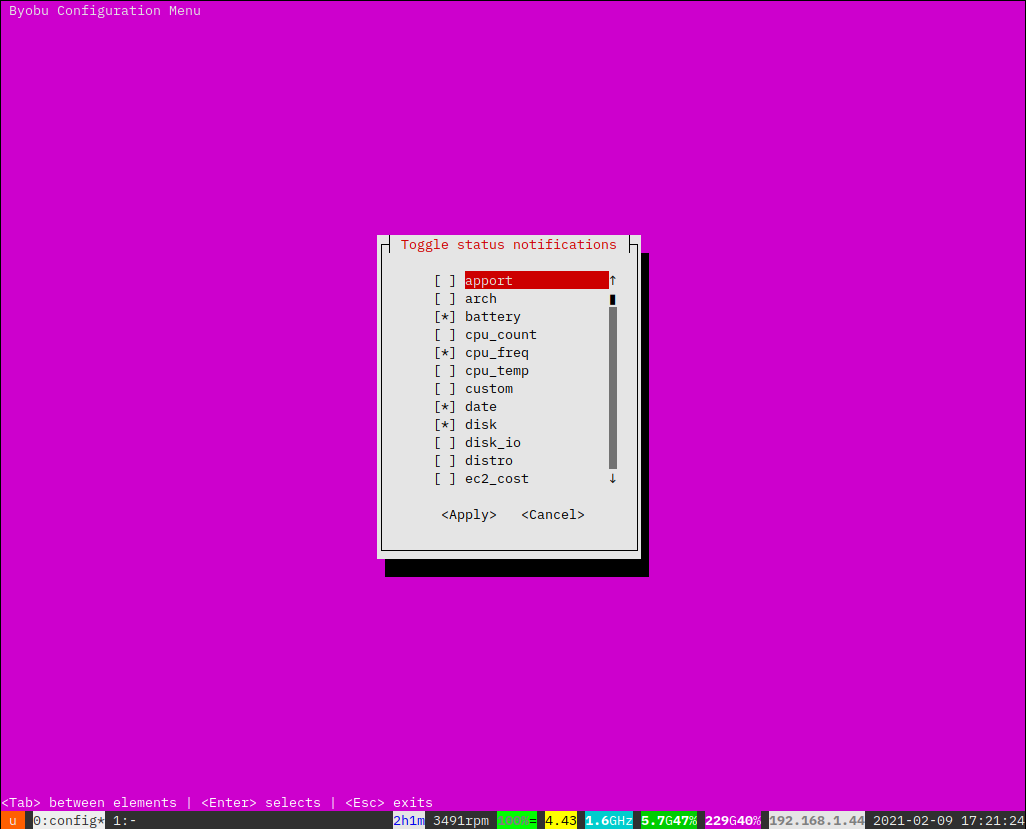 Byobu has some easy keyboard shortcuts including [F2] to launch a new window, and [F3] & [F4] to switch window. There’s plenty more but those are the basics. When starting up the laptop, rather than loop through opening a window and launching an application, I scripted it to speed things up.

On boot I login, launch byobu then run my apps script which lives in ~/bin. It is super simple and looks a little like this. Mine is way longer, listing ten or so applications, but you get the idea.

Once I launch that, I grab a cup of tea and sip while everything starts up. Much like logging into your desktop and having all your gui apps launching, it can take a little while - seconds - not minutes.

I have previously written about my love for rsnapshot, and I use it here, too. I bought Sandisk 128GB USB key (affiliate link) which sneakily fits nicely in one of the free USB ports.

I have formatted the USB stick partition on /dev/sdb1 using ext4 and added a line to /etc/fstab to make sure it’s mounted under /mnt/backup. The internal disk is /dev/sda.

I configured rsnapshot via /etc/rsnapshot.conf to use the USB stick for backups.

I check the log file in /var/log/rsnapshot.log periodically, and everything seems to be working okay. I have local backups going back months, and remote backups of data where needed.

Many of the applications I use have been around a very long time. However there’s a bit of a surge in new command line applications recently, a lot of which are written in Rust or Golang. A bunch are command-line ways to interact with modern web services via their official APIs. That’s the case for the Mattermost, Slack, Spotify and Telegram options below.

A large part of my work is talking to people. Everyone is different, and they use all manner of chat platforms. At work we use Mattermost for internal discussion, so I use matterhorn. I can’t show you a screenshot of that, because it’s all internal chatter. Here’s a screenshot from the upstream project. 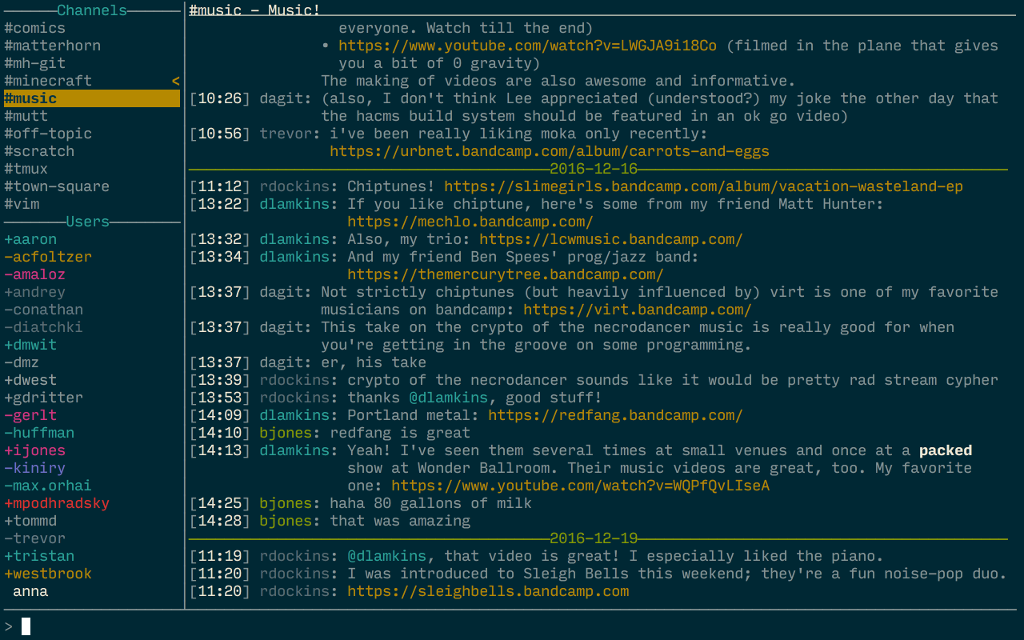 Yes, hipsters, some of us still use IRC. Get over it. Irssi is the best IRC client ever. I use that. 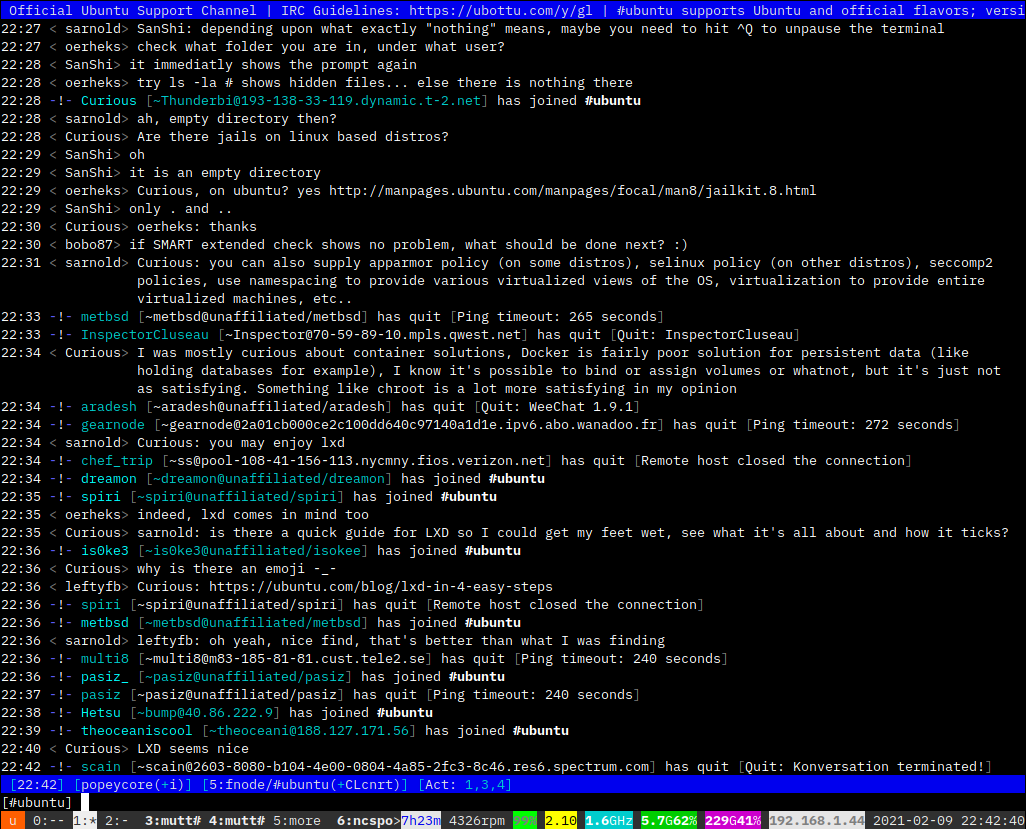 Ugh, okay. I used to use slack-term for this, but something broke recently and I can no longer auth. I need to investigate this. I suspect it’s because most of the slacks I’m in are free and have run over their limit of ten integrations, probably.

I use Telegram on desktop and mobile quite a bit. There’s a command line client called tg which I’ve used in the past, but since I always have my cellphone with me, I tend to just use that, rather than use the command line Telegram client.

I use two tools here, both have been around for many years. OfflineIMAP runs periodically to sync my email down to the laptop. It can run interactively, but I choose to have it sync in the background, otherwise I forget to run it, and then the email builds up and takes a while to sync. I configured OfflineIMAP to sync to ~/Mail for two accounts work and personal in subdirectories ~/Mail/personal & ~/Mail/work.

To actually read and compose mail I use the venerable Mutt. Mutt is a highly configurable email client. I launch two copies via my apps script, each pointing to a different configuration file. That way I have one window for personal mail and another for work. 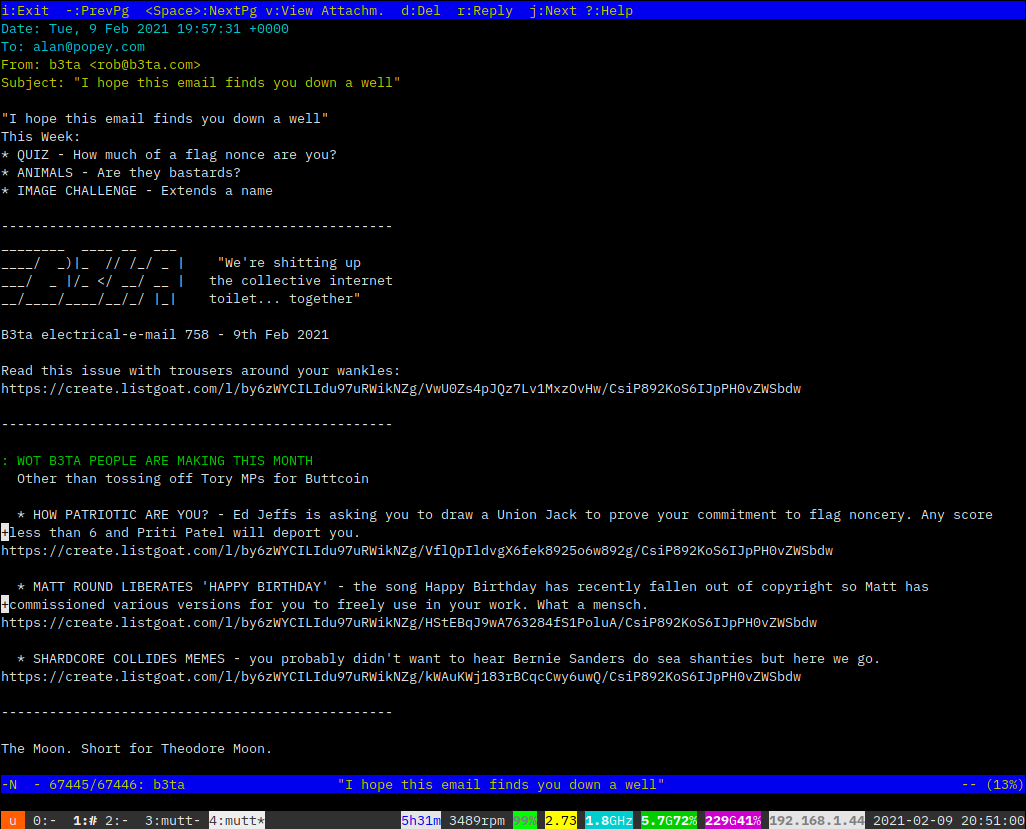 Mutt can be configured to send directly, via SMTP or IMAP, or it can put the mail in the ‘outbox’ and the next time OfflineIMAP runs, it can send it with any other pending mail.

I don’t often give presentations in person these days, but I could use presentty, and indeed did for the lightning talk at OggCamp a while back. Presentty is available in the Ubuntu repository. The presentation file are RestructuredText which are easy to write in any text editor. Here’s the first few ‘slides’ from the presentation I gave.

I like to listen to music while I work. Why not here too!? I have some music stored locally for disconnected listening, and with 250GB SSD, I have plenty of space for it. Cmus can play music locally just fine. 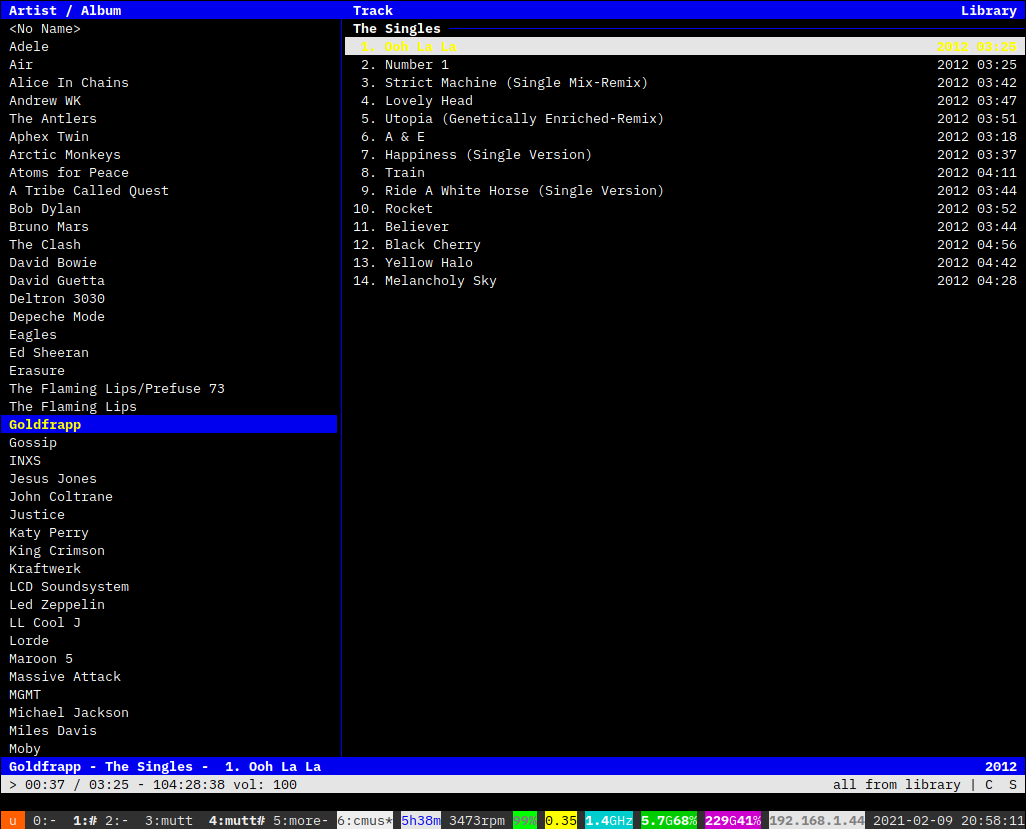 Alternatively I can stream from my Spotify account with ncspot. 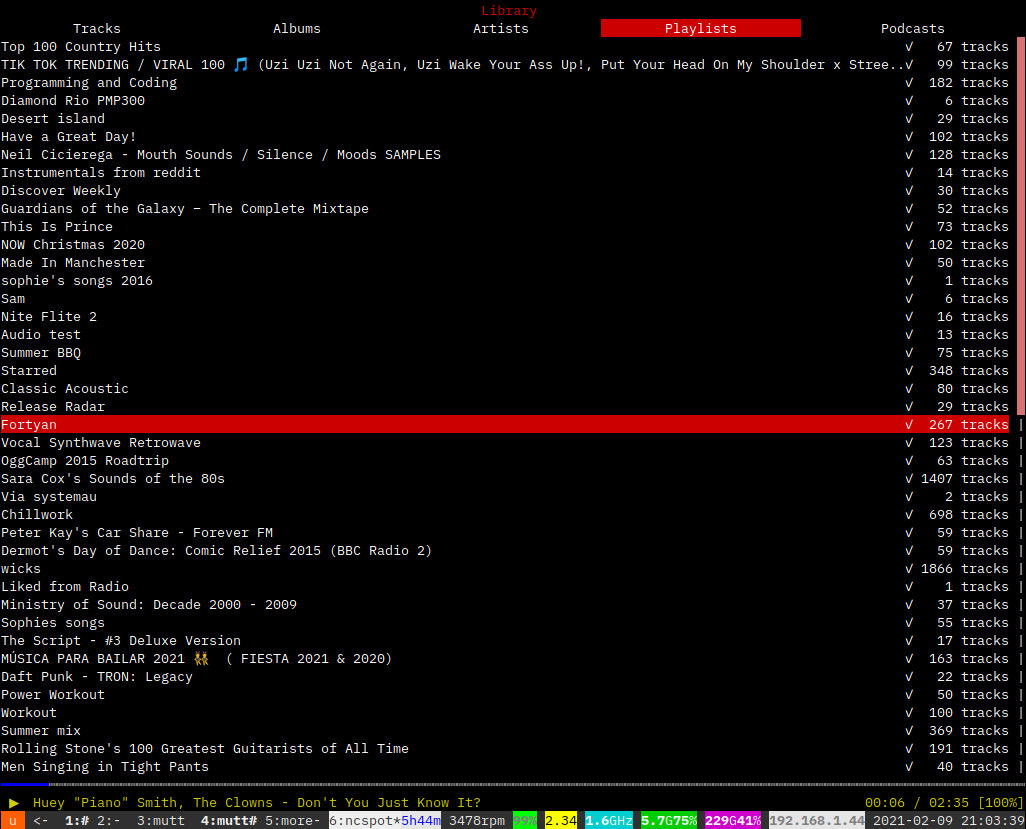 Catching up with RSS feeds is easy with Newsboat. 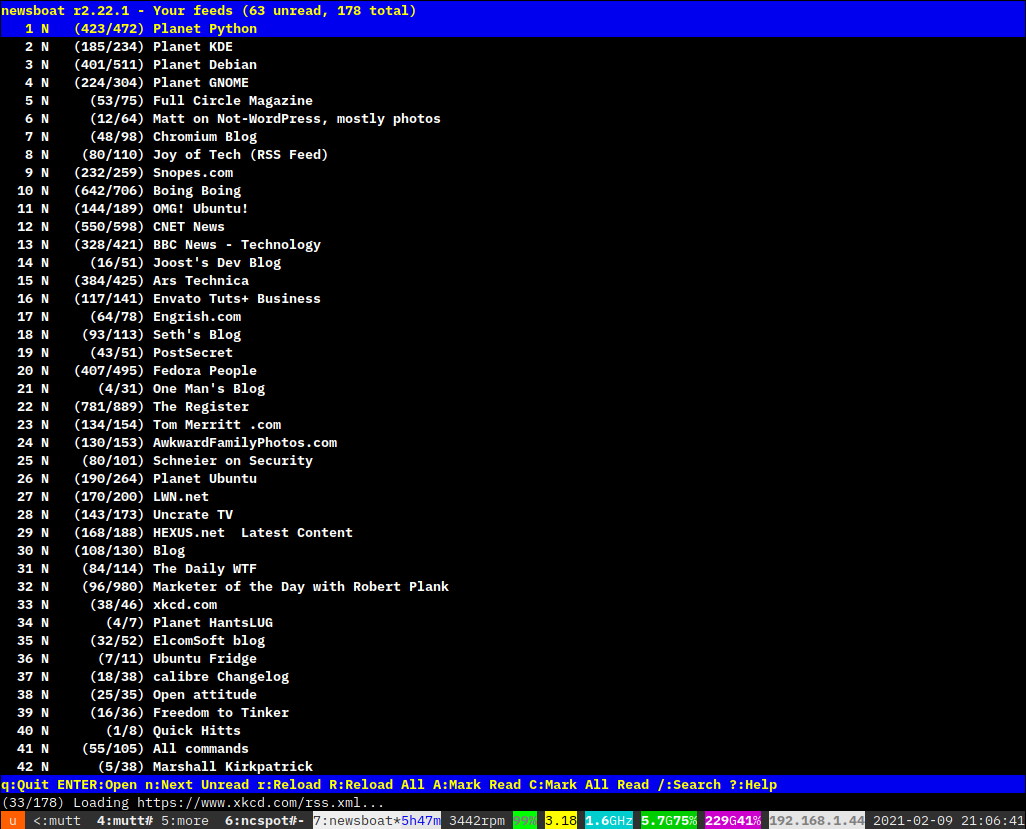 Getting files on or off the device isn’t a problem. It has a spare USB port or two, so I can easily copy files around with sneakernet. But I can also use traditional tools like sftp / scp and rsync. On top of that there’s Syncthing which is a free-software dropbox-a-like to keep files on my desktop and laptop synchronised.

For large one-off file transfers, perhaps off-site, I also use Wormhole which is great for quickly buzzing a file to a friend of co-worker without worrying about VPNs or firewalls. Very neat.

Finally Serve is a super simple utility which spins up a webserver on port 8080, in whatever folder you’re sat in. Handy if you want to get files off this machine over the network. Just point a browser at it and download. Clearly be careful what folder you’re in when you do it, as it shares all files. You can add simple authentication user/pass, and even enable https.

The web can be a little tricky on the command line. There’s certainly browsers, Links and console based tools for searching Google or DuckDuckGo. 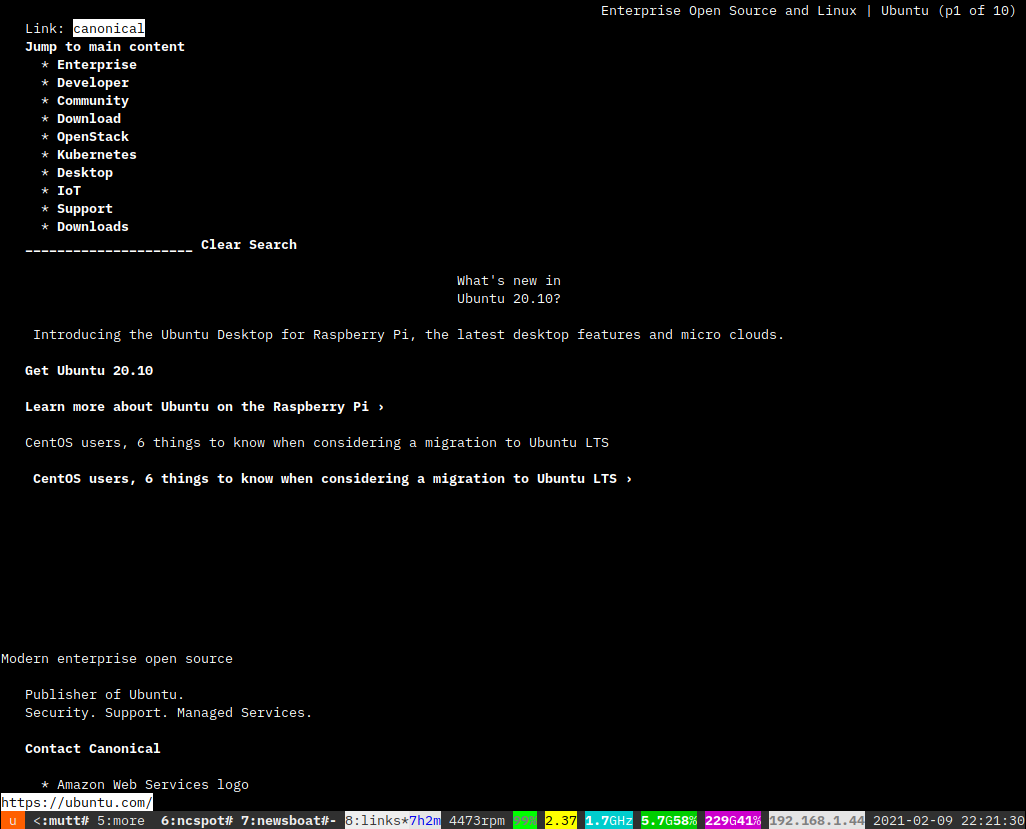 However, these days many pages are difficult or impossible to view in a text only command line browser, especially javascript heavy ones.. Sad times. Twitter doesn’t work for example. 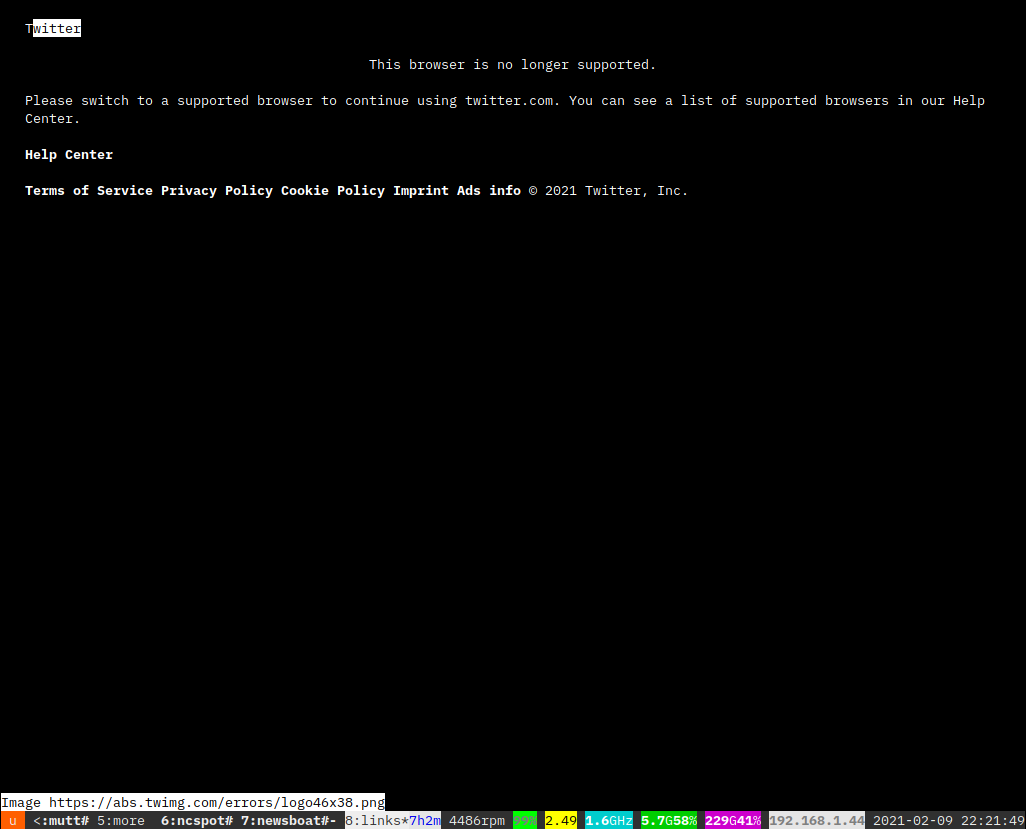 Nothing of value was lost.

There’s fun things you can do on the command line including games like Dwarf Fortress and the ever popular NetHack, but the pinacle of gaming in the terminal has to be Antsy Alien Attack! 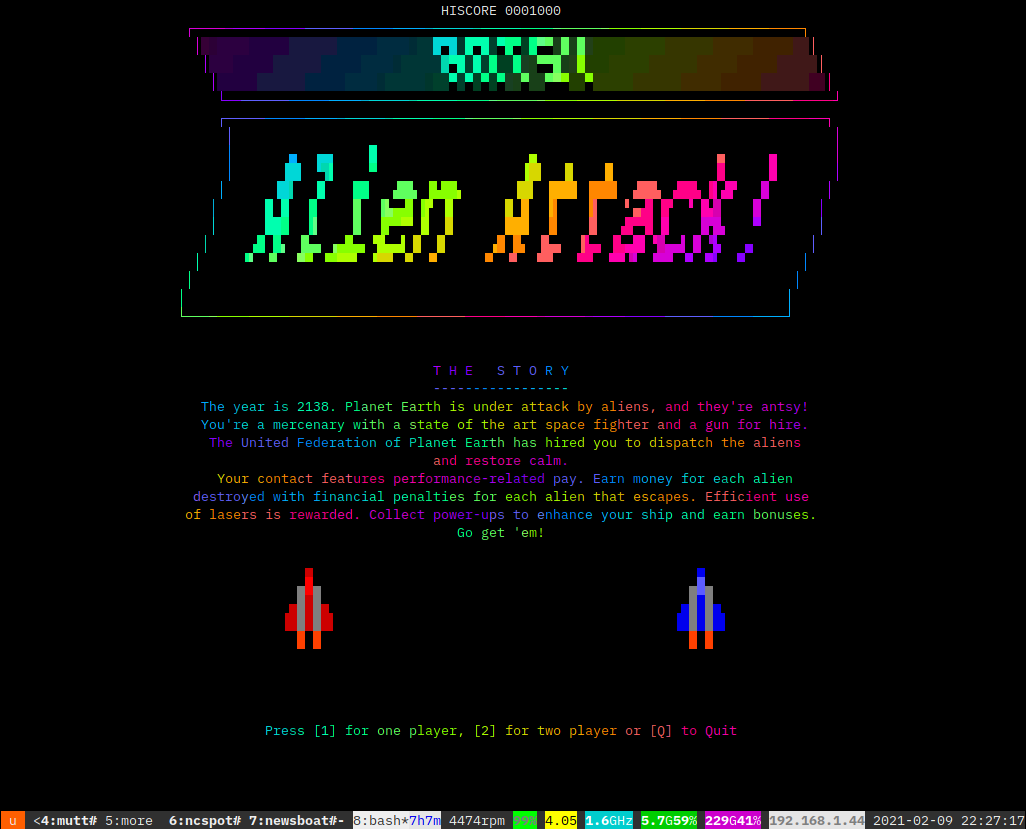 While this is really just a bit of fun, there’s a tremendous amount of productive work you can get done on the command line only Linux system in 2021. Have a look around, discover some old and new applications, and maybe save some CPU cycles and RAM here and there along the way, or just have some fun playing.