Last year ( 😄 ) I wrote an article called Snap Along With Me in which I detailed how I approached snapping a rust application called t-rec. Well, I’m back with another “Snap Along”, this time we’re snapping an application written in Golang.

During a meeting to on-board a new member of the team at work today, I went through a similar process as my last blog post. This time I chose a different application, so I thought I’d write it up here. I’ve previously explained how I browse the various GitHub Trending pages for each language. Today was no different, we browsed the trending rust projects then moved on to trending Go projects. 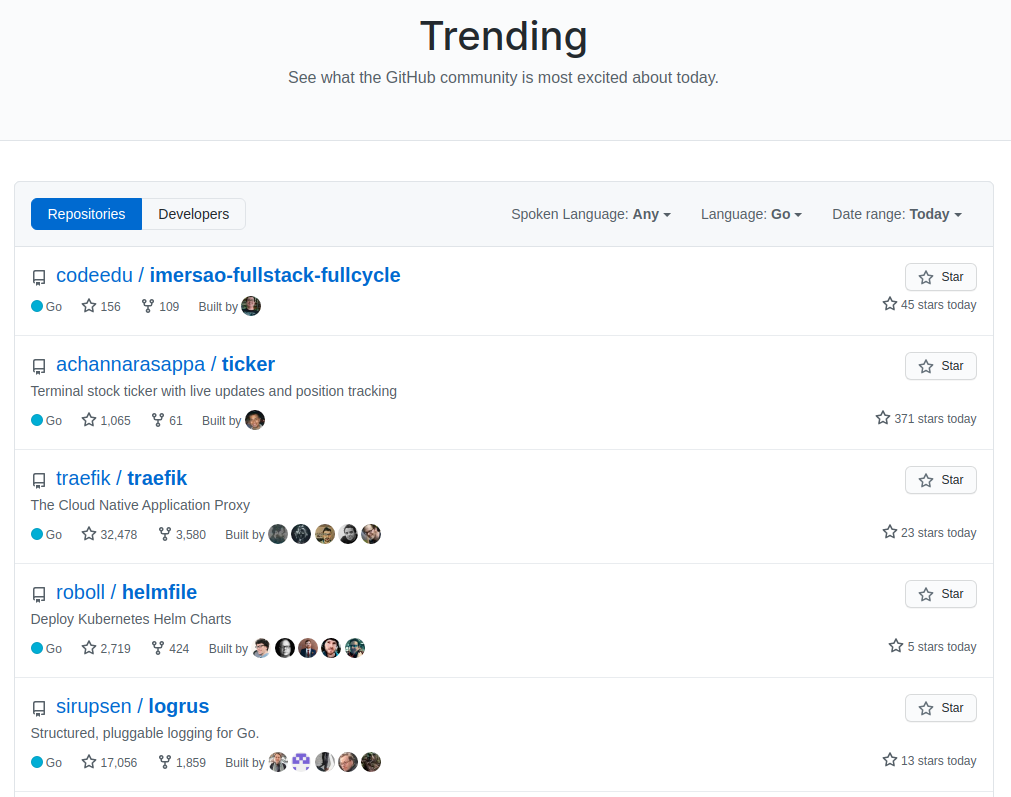 Right near the top I spotted ticker by Ani Channarasappa which is a Terminal stock ticker with live updates and position tracking. It looks great, is easy to use and it’s zeitgeisty! The project was only created ten days ago. Here’s what it looks like.

First things first, let’s look around the project and make sure it’s a good candidate. 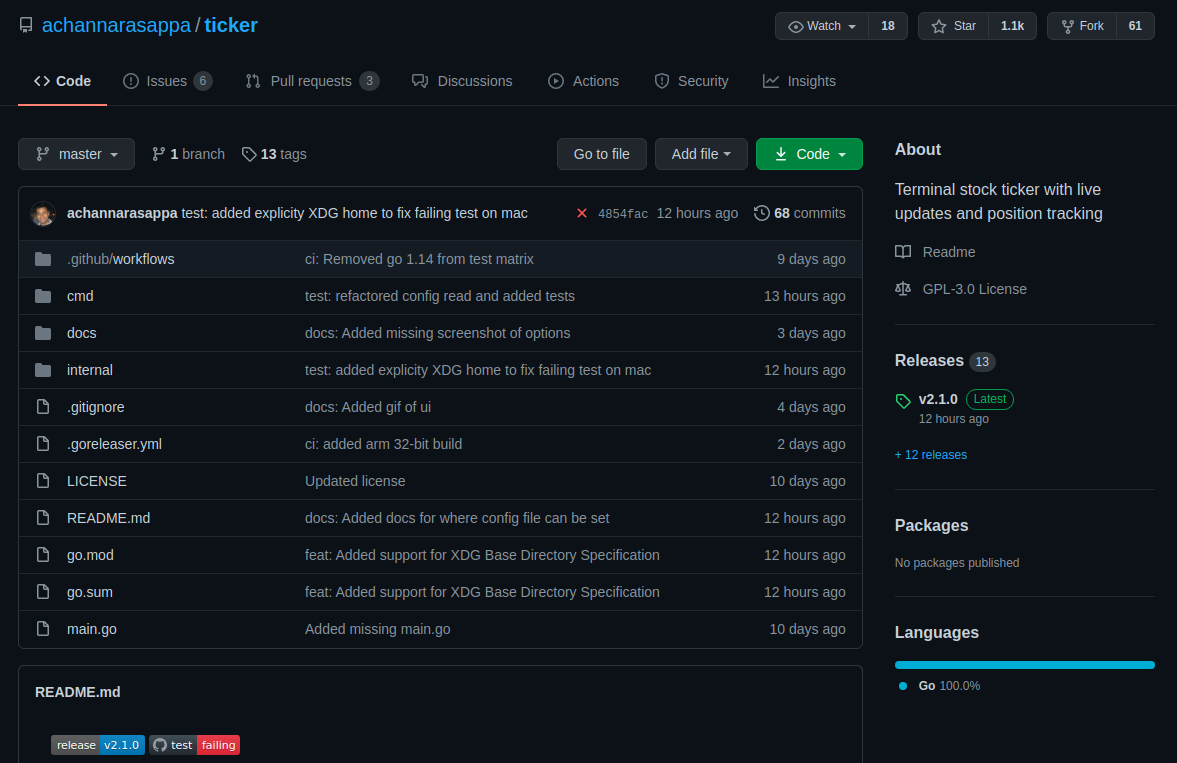 It’s a command line Go application, which tend to snap up very well. We typically end up with a small standalone binary, which will compress down nicely on disk, and won’t usually need many additional libraries to be bundled. I checked the existing issue tracker and pull requests to see if anyone had already made a start. I also checked the snap store to ensure there wasn’t already a snap of this published. I had a good gut feeling from the screenshots that the application would likely only need network access to pull stock prices and display them on the screen. No weird permissions would likely be needed, so it could be strictly confined and published quickly.

All good, looks like a fine candidate to snap. Let’s get started.

Now, recall I mentioned I’m only doing this as a demo to a new team member, so they can see the process I go through when snapping a new thing. This was intended just as a demo, but future me can tell you (spoiler alert) I already successfully snapped it and it’s published in the store under the ticker name.

First we make a folder in which to do our prototyping.

In the folder I issued the usual snapcraft init which creates a template snap/snapcraft.yaml.

This is all boilerplate we can replace as we go. Let’s start with the metadata.

I replace it with data from the upstream git repo, and specify we’re going to use the base of core20 which means it’ll build in an Ubuntu 20.04 LTS container. I use adopt-info to specify the version should come from the ticker part we’ll define in a moment.

I’m anticipating this can be strictly confined, so we set that next in the snapcraft.yaml.

We also know the i386 architecture (32-bit Intel) is no longer supported as an install arch for Ubuntu 20.04 LTS, so we’re going to build ticker for every arch except that one. Here’s how we do that. Yes, you will be able to check your portfolio on your S390 mainframe. Sweet.

There’s only one part to this snap, and that’s the ticker project itself. Snapcraft has a go plugin and it thus knows how to build a project made with Golang, so not much to specify there. I specified a source-tag which I got from the upstream project releases page. As I write this v2.1.0 is current - thirteen hours ago. Later I’ll remove that line so it builds the latest tip of master, rather than releases. So adventurous users can try the latest commits directly from the edge channel in the Snap Store.

The snapcraftctl lines simply pull the source then set the version for the snap which gets consumed by adopt-info earlier in the yaml.

Finally we have an apps stanza to expose the bin/ticker binary to the outside world on the computer the snap is installed on. I took a guess that the ticker binary would land in $SNAP/bin and that it only needs the network plug.

I tried building with snapcraft in a lxd container, with options to halt inside the container whether the build fails (--debug) or succeeds (--shell-after).

After removing some of the verbose cruft, the highlights of the build include something that looks a bit like this

I’d expected and kinda hoped the snap to fail to build so we could work through it, but “whoops”, it built successfully first time. So I exited the container with a ^d and installed the snap.

Knowing the snap is strictly confined, without the home interface, I am aware it won’t be able to see any files in my $HOME directory (and even if I did specify it, the snap can’t see $HOME/.ticker), I put a config file in $HOME/snap/ticker/common where the snap can see. I used the sample ticker.yaml from the upstream repo:

Running the application, pointing to the configuration file works fine.

Ok, so I figured given the snap works, I might as well upload it to the store. I used snapcraft register ticker to claim the application name. I then built the snap for all the popular architectures using the remote-build feature:

Time passes, and I end up with a bunch of snaps

I upload these to the store, releasing them to the candidate channel for further testing. That kicks off looking like this.

Note that last line where snapcraft uses the review-tools.snap-review command to do some sanity checks on each snap before they get uploaded to the store. This command comes from the snap review-tools which is an optional package you can install with snap install review-tools to give you the extra checks prior to uploading the snap.

The store performs the exact same checks on upload, this allows us to save time by not uploading something that will ultimately fail on the store side.

After each snap gets uploaded, a channel map for that architecture is printed, showing the incremental snap revision number of the snap in each channel

I can at this point test the snap on a bunch of machines, distros and architectures, and once I’m happy, release it to the stable channel. The releases page in the Snap Store looks like this. 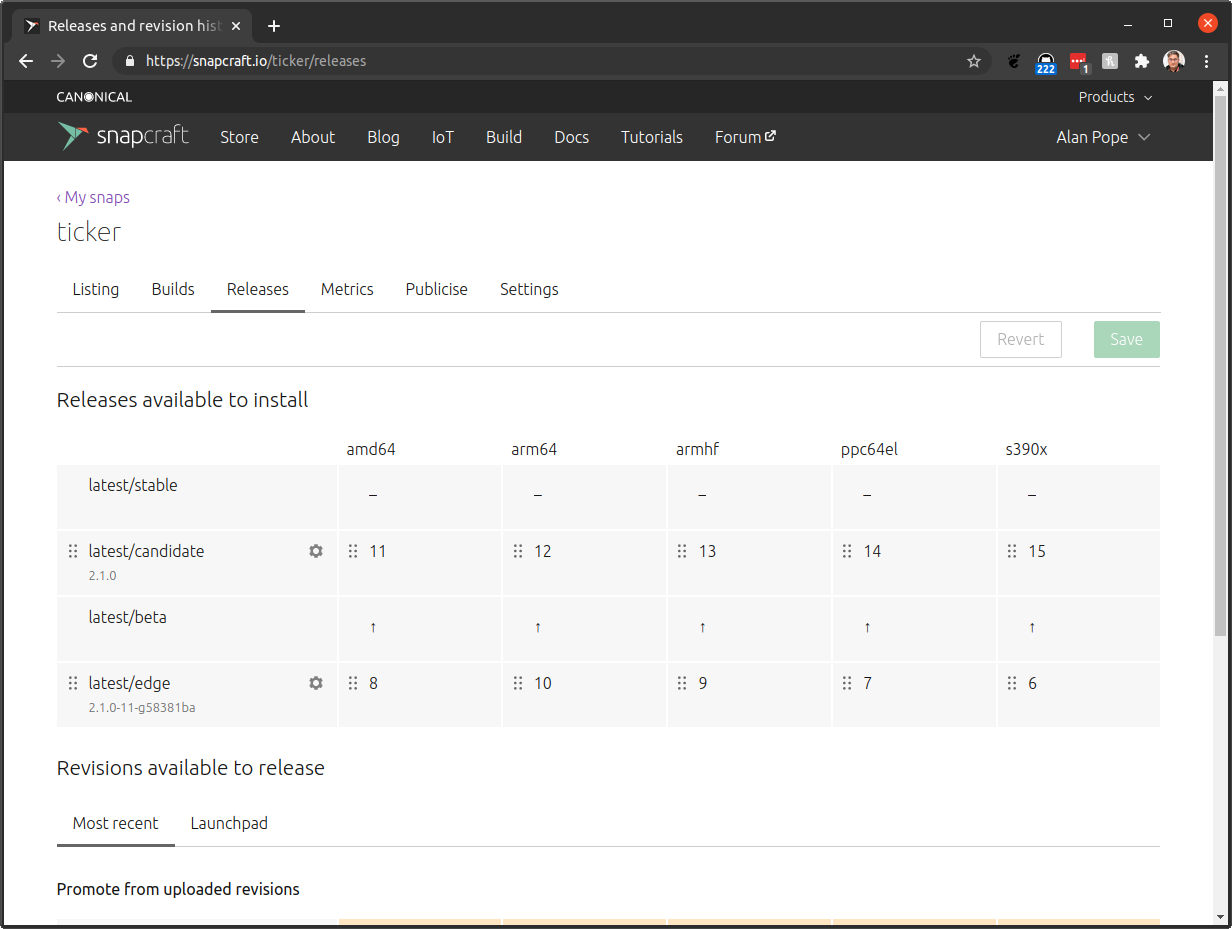 Finally I pushed my changes to a personal git repo and connect that up to the build process, so each time the application is updated, a new release is built and pushed to the edge channel. Here’s what that looks like. 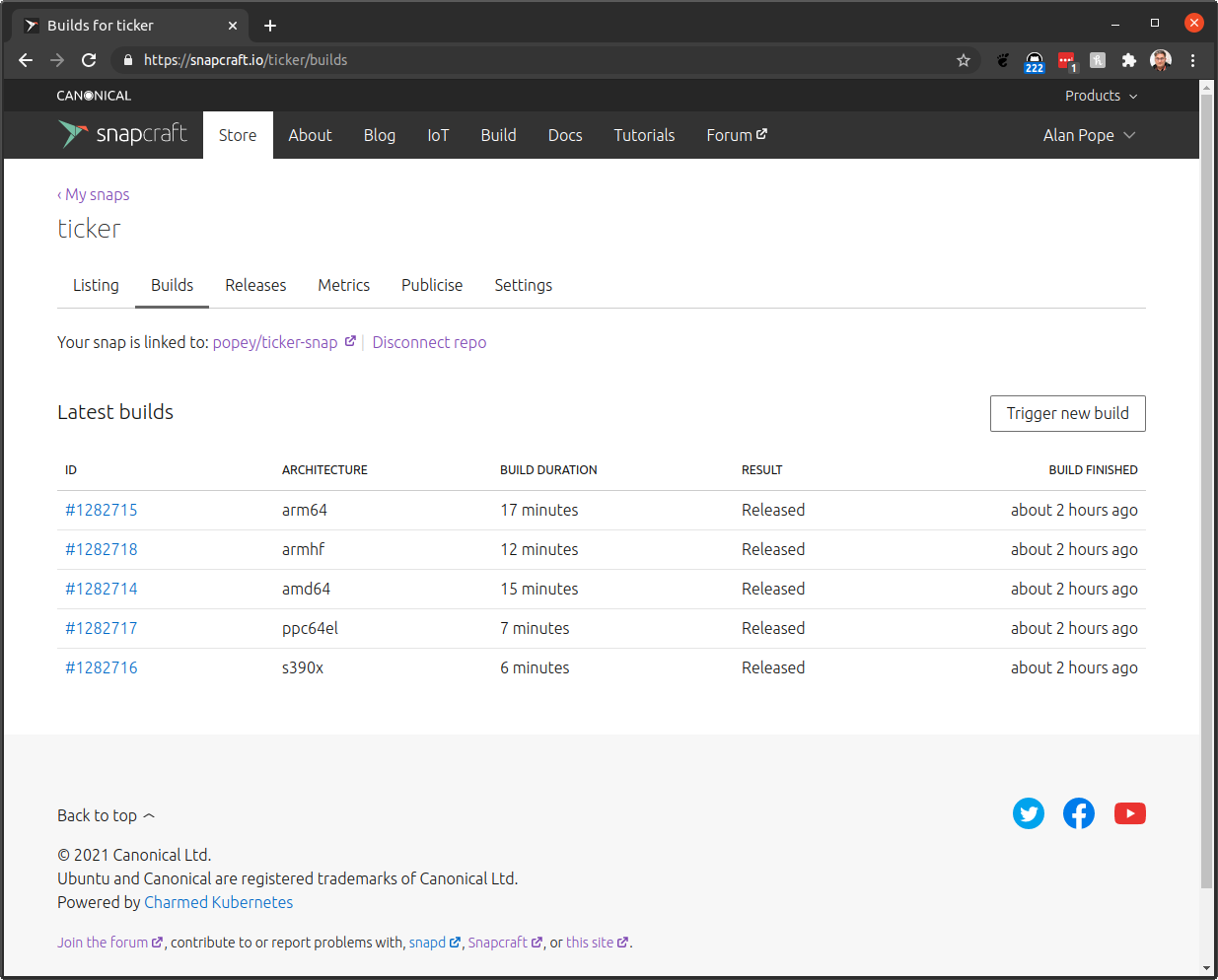 I can hit the “Trigger new build” button to manually force a build.

Lastly I will file an issue and pull request against the upstream project, offering the developer to have the snap name transferred to them, with the configuration created above. I’d way rather the upstreams for projects had their own snaps under their name rather than me publish them. But if they don’t want to, that’s fine too.

Hope that’s a useful walk-through to someone.